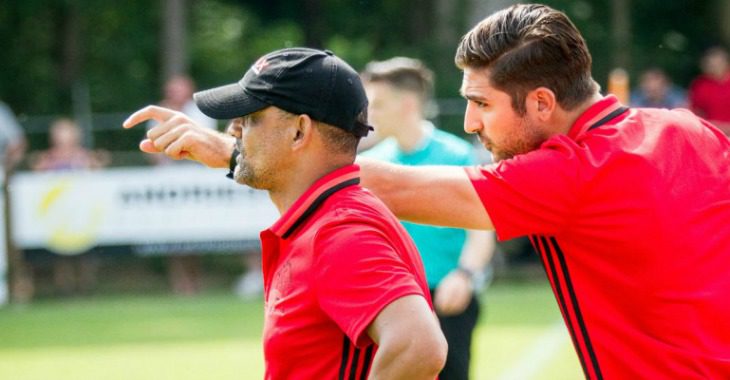 Kosta Scholiadis spoke to ajaxct.co.za during what has been a bumper-packed month for the Ajax Cape Town U18 head coach.

Having jetted off to Amsterdam late last month as assistant coach to Duncan Crowie for Young Ajax’s annual tour to the Netherlands, Scholiadis traveled to Ireland in the aftermath to attend the first phase of his UEFA B license course.

Scholiadis has not had a moments rest since his return to South Africa as he will be in charge of the U18 team set to partake in the Engen Knockout Challenge this coming weekend.

Ajax Cape Town have been drawn in Group B of the regional’s, which will take place at Parow Park Sports Complex from 30 June – 02 July 2017, with 16 teams to go head-to-head for the coveted title.

Ikapa Sporting, Milano United and Glendene United have been seeded alongside the Urban Warriors.

Ajax Cape Town lost in the final to Old Mutual 12 months ago, having claimed the Western Cape, as well as the Engen Champ of Champs title in 2015 following a 3-0 thumping of SuperSport United in Atteridgeville.

Kosta, welcome back to South Africa, welcome back from doing the first phase of your UEFA B course in Ireland, how would you describe the experience…

I went there on my own, arrived there on my own and everything was new to me. That being said, there were three other South Africans with me on the course – two Cape Town boys and the U20 National Team video analyst, so it was us four South African’s and people from all over the world.

It was a seven day, full day course. I was there for about 10 days, it was a very positive course, I learnt a lot and I got to view and hear different experiences from other coaches from all over the world. I got to learn from an international association, it is always good to see things from a different perspective, so I did learn a lot.

This was the first phase and the plan is to be back in Ireland same time next year, then I would have completed my course, my full UEFA B. I have passed the first part.

Before that you were with Young Ajax in Terborg and Amsterdam at the annual trip to the Netherlands. How was that as a whole?

It was a positive experience, to learn to adapt and to learn as coaches what other coaches do. The Terbrog Toernooi offered us the opportunity to speak and meet with other coaches to talk about how they do things and how they develop their players uniquely to ready them for their respective first teams.

Leo was outstanding in the fact that he has been consistent in these tournaments every year. You can count on him as a player, the second tournament was interesting as we brought in a new player [Lassina] Traore – he can only speak French – we had to throw him into the deep end and there was a lot of adapting.

What was impressive is that a lot of our young players stepped up in the second tournament. Oswin Appollis who is turning 16 this year, Tashreeq Matthews – we mustn’t forget is only 17 and our young players showed character to perform against big names that should usually put you under pressure.

Coming back home, we have the Engen Knockout Challenge coming up this weekend. A tournament where we lost in the final against Old Mutual 12 months ago, in 2015 we won it and also won the Champ of Champs. What are your expectations heading across the road this weekend.

Several of the boys were in Amsterdam earlier this month, are still young enough to qualify for the tournament, but there are a few that want to prove a point that failed to make it onto the plane.

So it is a nice balance of motivated and experienced players which we will bring into the tournament.

There is always a lot of pressure on Ajax Cape Town because teams always want to beat us at youth tournaments, how do you manage that type of pressure? Is that something Ajax players are accustom to?

Because they are young players there is nothing of ‘being use to something’ – they are always learning and there is always a new dimension, new dynamic of pressure.

The way we deal with it is that you have to remind the players to be level-headed because they can easily assume that we will win everything and that is where our downfall will be so it is about keeping our players grounded, while at the same time also letting them know that they are the best players, and that they can in fact win this. But they must do so in a grounded fashion and they must earn the win.

We are only as good as our last game. You have to earn victory, while knowing you are the best and knowing that football has a funny turn. Don’t give the opposition hope to win.

I know coaches don’t like to do this, but are there any players we should keep an eye on in Parow this weekend?

If also I can bring forward Matthews again, who has been playing in the ABC Motsepe League. He has shown a lot as a number 10 and as a winger in the 11 position. Those are two names, but there is no doubt that there will be a few surprise players that will impress the coaches in the Youth Academy.