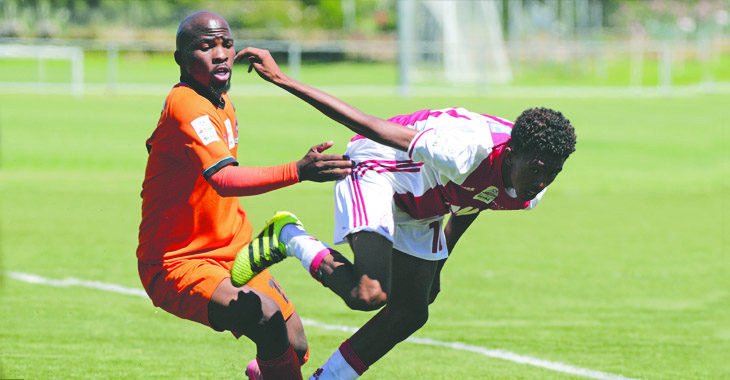 Ajax Cape Town are excited to announce the graduation of Tashreeq Matthews, from our Youth Academy to our Premier Soccer League (PSL) squad.

Born on the 12th of September 2000, Matthews’ promotion further underlines the club’s commitment to youth development with the 17-year-old joining a host of fellow former Urban Warriors Youth Academy players in the club’s First Team.

Matthews follows in the footsteps of Leo Thethani and Kiyaam Bull in graduating into the club’s PSL Team over the last 12 months, with Thethani having since gone on to further his career at Ajax Amsterdam alongside Dean Solomons.

The teenage forward first joined Ajax Cape Town in 2012 and has steadily climbed the ranks onto becoming one of the country’s most exciting talents.

Matthews starred for the club on Young Ajax’s tour to the Netherlands last year with his exploits rewarded at the ICGT Tournament where he was named in the Team of the Tournament alongside Renaldo Leaner and Luthando Mateza.

He duly received a call-up to the National U18 team in August last year for friendly matches against England and Brazil. Matthews found the back of the net in a 2-1 victory over the Three Lions.

Matthews, who hails from Hanover Park, will now be aiming to make a name for himself in the PSL as he sets his sights on Europe.