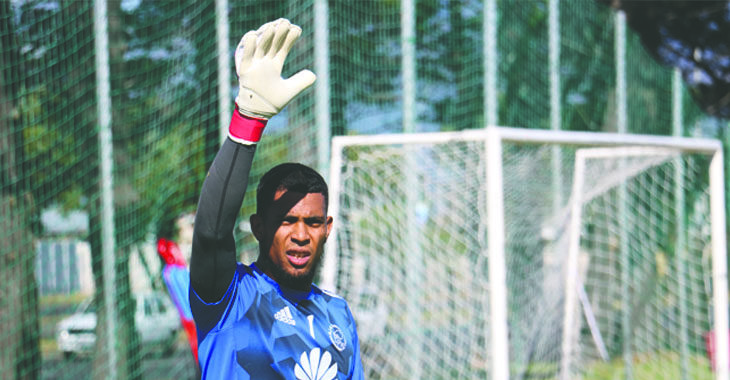 Ajax Cape Town goalkeeper Brandon Petersen is fully focused on what will be a crucial month of Absa Premiership action for the Urban Warriors.

The club play five times in the league in April, starting with an away fixture to AmaZulu next Tuesday and three points is of vital importance as we aim to climb up the log standings.

“It was good for me, it was a good experience and just for me to be part of the team was a major thing because it was my first time actually on camp with the guys, training with the guys,” said Petersen. “It was a great experience.”

“Training with experienced goalkeepers like Itumeleng Khune, Darren Keet and goalkeeper coach Andre Arendse. It is good to have been in a different environment, away from Ikamva and obviously you can learn a lot from them and Stuart Baxter who is a good coach.”

He continued: “It was a great experience, traveling wasn’t that bad – a two hour flight from Johannesburg [to Ndola].”

“In all it was really good, especially seeing former teammates like ‘Tyson’ (Thulani Hlatshwayo) and Keagan Dolly. It was nice being on the same team as them again.”

Petersen has now set his sights fully on the remaining league fixtures for the 2017-18 season and the shot-stopper is confident that the club will finish – what has been a difficult campaign – on a good note.

“Well, for me, it is always focusing on the job at hand, you get picked for your National Team for how you perform at club level,” Petersen added. “I need to remain focused on getting the team in a safer position and if you put in the hard work, performances and effort it [call-ups] will continue to come.

“For me, it is now the third time we find ourselves in this position and it is never easy because at the end of the day the whole environment is different because naturally you panic.

“I think it is important that we remain calm and focused. We have a good enough squad to come out this position and I think the hard work and preparation we have put in over the past few weeks will help us a lot. We are ready for the fight ahead,” Petersen concluded.