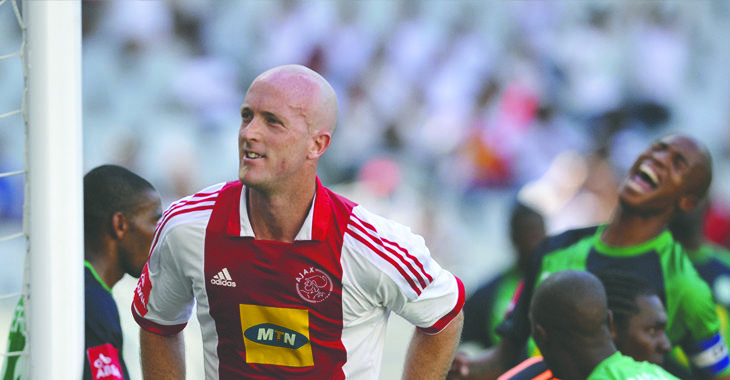 Former Ajax Cape Town defender Matthew Booth was part of the squad that battled relegation in the 2012-13 Absa Premiership season and with one game remaining in the current campaign, it’s do-or-die for the Urban Warriors.

The Cape club welcome Kaizer Chiefs to Cape Town Stadium next Saturday, the 12 of May, with victory over the Soweto giants to guarantee safety for the hosts.

Ajax Cape Town and the Amakhosi have been involved in memorable clashes over the years and none more so than the unforgettable showdown in the Mother City five years ago.

Battling at the wrong end of the table, the Urban Warriors needed a win against the title-chasing Glamour Boys. Lebogang Manyama opened the scoring before Tefu Mashamaite pulled the visitors level. It would be the hosts, though, to come up trumps as Manyama completed his brace in the 88th minute before Mabhuti Khenyeza rounded off proceedings.

Muhsin Ertugral, who spent several years at Kaizer Chiefs, was also the head coach of the Urban Warriors back in 2013 and Booth feels the club have the right man in charge to lead Ajax Cape Town past the Amakhosi again.

“You couldn’t ask for a better person to be in charge for a game against Chiefs,” Booth told ajaxct.co.za. “Knowing his history at Chiefs, Muhsin got his tactics spot on, on the day – identifying the threat posed by fullbacks Tsepo Masilela and Siboniso Gaxa in closing the channels.

“Also, Manyama was absolutely on fire that day and enjoyed an excellent game.

Booth continued: “I don’t know if it is true or not, but Muhsin told us that Chiefs had brought their championship winning t-shirts to Cape Town and that if we lost they would celebrate in front of us at our home. That gave us added motivation to beat them.

“But, the situation is very different now. On the day, the experienced players will need to stand up – you need strong leadership, especially when things go wrong and you are on the back foot, it is important that the team reacts positively. It is difficult to reset your mind and carry on following a setback.

“If things don’t go as planned Muhsin will rely on guys like Mosa Lebusa and Mario Booysen to encourage the team and refocus. Hopefully it will not come to that, though, and Ajax Cape Town will have a good game from start to finish.

Booth has been very impressed by Lebusa throughout the campaign, with the Ajax Cape Town skipper having popped up with crucial goals this season; including a 93rd minute winner over Baroka FC in Athlone last week.

“I have been very impressed with him throughout the season. He is someone that leads from the front. I’d like him to be a bit more vocal as a captain, but he has showcased a lot of maturity and stepped up to the plate with some crucial goals.

“I particularly enjoy when he goes forward in attack. He has put in major shifts for the club this season,” Booth concluded.