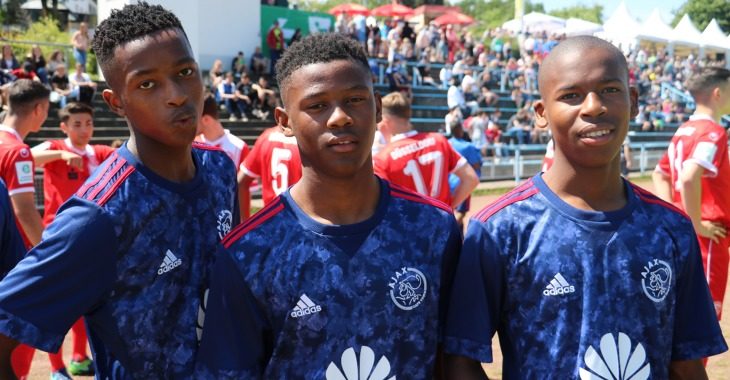 Young Ajax midfielder Khaya Mfecane has caught the eye in Europe and having impressed in Ennepetal, the midfielder is hoping for an even better showing in Terborg.

The Mfuleni-born playmaker is the younger brother of teammate Sonwabile, with the duo manning the midfield in our final game of the tournament against Fortuna Düsseldorf.

Khaya found the back of the net to give us the lead, but the German club hit straight back as the game ultimately ended in a 2-2 stalemate. Fortuna duly won the ensuing penalty shoot-out 3-1.

“For us as young players it is a learning curve and I think we tried our best,” said Khaya. “We’ve learnt a lot from the older players, guys like Riyaaz [Koopstadt] who really stepped up today [vs Fortuna] and now we look forward to the next tournament and rectifying our mistakes.

“Football will humble you. We came here confident – we won the first game 6-0 and then just needed a goal in our final group game to progress, but we failed. You have got to humble, look forward and never back.

“It feels awesome playing with my brother for the very first time and I am enjoying it,” he concluded.

The Urban Warriors finished in 6th place in Ennepetal and South Africans will be eager to improve as they now turn their attention to the Terborg Toernooi.