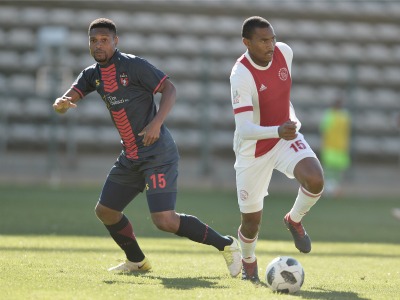 Coach Andries Ulderink says a clean sheet would have made it a perfect day but still delighted with how the players applied themselves in beating TS Galaxy 3-1 on Sunday afternoon.

In an entertaining game at Athlone stadium, Ajax scored three first half goals through Masilakhe Phohlongo, Kegan Johannes and Thendo Mukumela. The second goal, scored by debutant Johannes, was a result of some excellent football in a move started by goalkeeper Brandon Petersen. We could have extended our lead after creating numerous chances but it was TS Galaxy who scored a consolation with the last kick of the game, denying us a much needed clean sheet.

“Yes, I would have loved to have kept a clean sheet to be fair. In the second half, we created really good chances to score the 4th goal. The opponent still had a feeling that they could still get something. They missed the penalty but if we scored the 4th goal, we make the game easier for us.

“We had couple of players with some small issues, Grant (Magerman) was off sick for couple of days and he struggled towards the end of the game. Ulderink said after the game.

Coach Ulderink was happy with how the team defended after conceding seven goals in the previous two games, 4-4 draw at home to TTM FC and a 3-0 defeat away to Amatuks.

“I looked back to both games and I think the four goals we conceded in the game at home, we did couple of things not very well. But it was also because we played with 10 men and we made individual mistakes and when it is individual mistakes, it is difficult to train on.

“After the game against Amatuks last week, we trained on technical things, especially players dropping back into midfielders after going forward and on man-marking.”

Coach was satisfied with how our debutant and first Graduate from the Ajax Lambda Institute Kegan adapted to the game.

“Kegan was very calm, made good decisions and also nice for him to score a goal on debut. First half was high quality, we pressed really well and I knew with this game plan, it was difficult to get him for the whole game but I had hoped for a bit more from him in the second half.” Ulderink concluded.

Our next game is against TS Sporting on Friday, 8 March at Athlone stadium. Kick-off is at 15:30