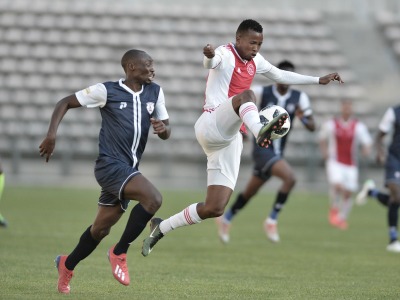 Ajax Cape Town are up and running for the 2019 Glad Africa Championship season after securing a first win of the new campaign with a 3-2 win over Free State Stars at Athlone Stadium on Saturday afternoon.

The Urban Warriors could not have asked for a better start as they dominated the opening minutes of the match with maestro Grant Margeman dictating terms in the middle of the park.

And the Urban Warriors made it count as they took a 2-0 lead with quick goals in the 4th and 7th minute. Margeman opened the scoring with a nice finish from inside the box and Eleazar Rodger added a second goal with a simple tap in from a rebound.

After going 2-0 down, the visitors woke up and started putting few passes together. They thought they had pulled a goal back in the 10th minute but their joy was short-lived as the assistant referee’s flag was up for offside.
Our new goalkeeper, Nick Hengelman made his first save of the afternoon 15 minutes into the game as he produced a great point-blank save to deny Stars.

Then, with 20 minutes gone, Kegan Johannes unexplainably handled the ball in the box to gift the visitors a penalty from nothing.

Daniel Gozar picked-up the ball and sent Hengelman the wrong way to make it 2-1.

Four minutes later, Margeman scored a goal of the match with a powerful long-range drive into the top corner to restore the two goals lead going into halftime.

After the break Stars made changes and started dominating the game. They created couple of good chance with the best one falling to Gozar in the 81st minute but his strike went over the bar.

Gift Sakuwaha finally scored the visitors’ second goal in the 90th minute making it a nervy ending to the game but the Urban Warriors held on for the victory.

Assistant Coach, Calvin Marlin, who was in charge on the day as Coach Andries Ulderink is still awaiting his work permit, felt it was important to come away with a win in the first game and it was a good experience for the youngsters who were making their debut on the day.

“We started well scoring two quick goals. It is always a worry as a coach that you take your foot off the pedal and start giving the other team time to come into the game. And exactly what we did, conceded a stupid penalty, 2-1 and it was a bit nervous with a young team. But we turned it around after that and scored the 3rd but once again, took the foot off the pedal and started dropping off, giving stupid balls and fouls away and that brought stars back in the game. Marlin said after the game.

“To concede with four minutes to go is always the worst thing, you just praying that we hold out and we did, thankfully. To come away from the first game of the season with a win is good and for the youngsters also, it was their first time ever in the NFD level. For them it was a good experience.”