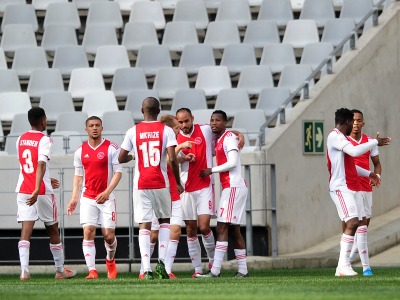 Ajax had failed to win any of their last two games, drawing away to Mbombela United before being thrashed 3-0 at home by Uthongathi. The urban Warriors came from a goal down to collect all three points against one of the teams expected to fight for the championship.

The Urban Warriors fans might have feared the worst when Ndabayithethwa Ndlondlo opened the scoring for TTM with a splendid free-kick after only five minutes.

But Coach Andries Ulderink’s boys reacted and scored two goals in a space of ten minutes to turn the game around. Junior Sibande scored his first goal for the club in the 22nd minute with a header from Abednigo Mosiatlhaga’s delivery to level matters.

The goal seemed to have spared the Urban Warriors on as they started to dominate the game, and it was no surprise when Grant Margeman pounced on a mistake by TTM keeper to head Ajax into the lead with 30 minutes gone.

TTM pushed hard to find the equalizer before the break but it was not to be as the score remained 2-1 at the interval.

Ajax could not have asked for a better start in the second half as Eleazar Rodgers extended the lead to 3-1 with a third headed goal of the afternoon. The header was from another quality delivery by Mosiatlhanga.

TTM needed a response and they pulled one goal back on 66 minutes. Mboniseni Mbandlwa went a run, dribbling through the Ajax defence before dinking the ball over Nick Hengelman to make it 3-2.

Ajax suffered a setback when substitute Katlego Otladisa had to be replaced with Kegan Johannes after picking up an injury with 10 minutes remaining.

The visitors throw everything at Ajax goal but the Urban Warriors held on to end TTM’s unbeaten run.