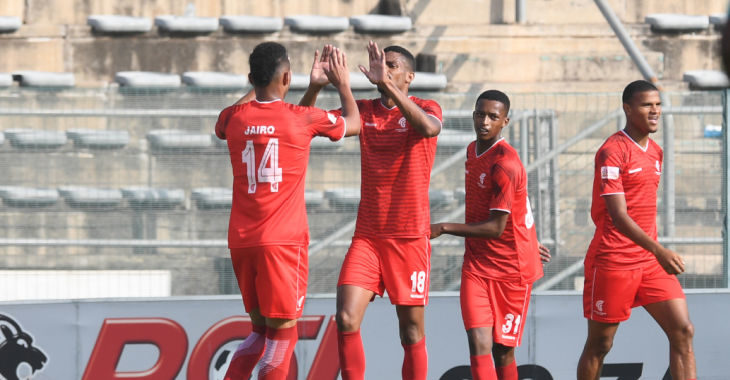 Cape Town Spurs returned to winning ways in the 2020-21 GladAfrica Championship season with a 1-0 win over Pretoria Callies at Lucas Moripe Stadium on Tuesday afternoon.
Callies had the best chance in a first-half of very few chances. Lincoln Vyver directed his attempted clearance straight at Joshua Sauls in the third minute of the match, but the Callies midfielder failed to hit the target with the goal at his mercy.
Spurs improved after the interval and opened the scoring in the 52nd minute. Ikamva graduates Kegan Johannes, Riyaad Norodien and Ashley Cupido linked up with the latter biding his time in the penalty area before driving a low shot into the corner of the net. Our young forward has now scored three goals in his last three matches.
The Urban Warriors bossed the ensuing minutes with Chumani Butsaka sending his rasping effort narrowly wide in the 65th minute, but Callies fought back.
Vyver had to be at his very best to keep out the hosts in quick succession four minutes later but Spurs’ defence tightened up in the closing stages to see out a much needed win.
Cape Town Spurs: Vyver; Stander, Sibande, Da Silva, Johannes, Mukumela, Khumalo (Dias 90+5′), Mfecane, Norodien (Butsaka 61′), Cupido, Batista (Mosiatlhaga 75′).
Yellow cards: Norodien, Khumalo
Goals: Cupido
Share Post: