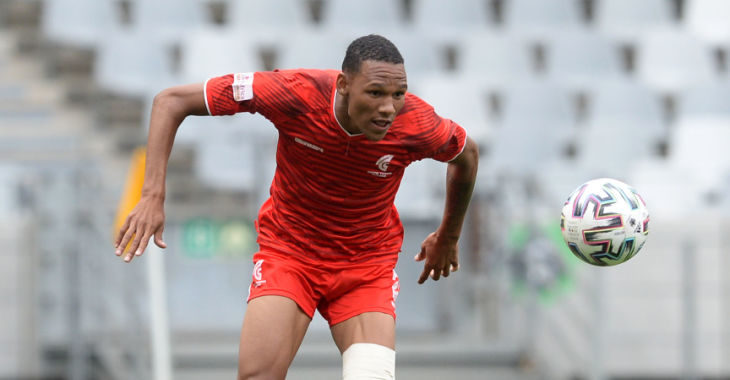 Kegan Johannes might only be 19 years old, but he has already amassed 50 professional appearances.

A proud youth product of Ikamva, Johannes is part of a strong core of rising stars within the Cape Town Spurs first team. While the Urban Warriors have yet to hit form in the GladAfrica Championship this season, the up-and-coming defender is confident that the club’s fortunes will change sooner rather than later.

“Obviously the season has been very, very difficult,” said Johannes. “Playing wise I think the work ethic is definitely there, just a lack of goals and a lack of concentration in certain departments, but I think going forward we just need to focus on the job at hand. We will take it from there and I’m confident it [wins] will come.

Johannes considers himself an ‘experienced junior’ and while he still admittingly has a lot to learn himself, he is happy to help integrate fellow academy products into the youth team and says it is a ‘privilege’ for him to be playing alongside many of his peers.

“Having already played so many games does count in my favour, I am a junior with some experience. I can help the other juniors as well and share things I’ve experienced.

“It is definitely a privilege [playing in the first team with fellow academy graduates] because they know the philosophy,” Johannes added.

“It is not difficult to understand the way they play because the guys, they know what is expected from them and you know what they are going to do before they do it, considering that when coming through the ranks you play the same system and all of that so it is very much a privilege for me as a junior as well.”

Johannes has been used more as a right-back this season and while stating that centre-back is his natural position, the young defender is prepared to play wherever he is needed.

“Centre-back is my natural position, but as a footballer you need to be able to adapt, if the team needs you in a specific position you need to fill that role,” he continued.

He has also become a potent free-kick taker and packs a powerful shot, something Johannes keeps on training.

“Of course, I still work on the technique and practice free-kicks a lot. What has worked for me is to remain calm, your technique has to be on point. You need to work on those aspects and that will only improve you as a footballer,” Johannes concluded.

Spurs are not in league action this weekend but will be at home to JDR Stars on Wednesday, 17 March.