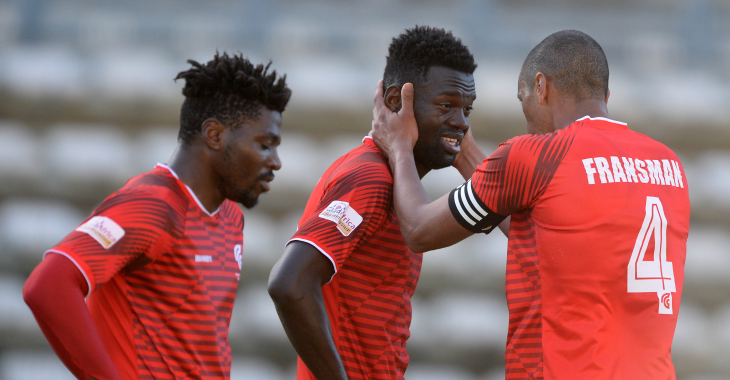 Second-half goals from Chico Bunga, Jairo Da Silva, Mosiatlhaga Abednego and Ashley Cupido secured the three points for the Urban Warriors, who remain second from bottom on the log but are now just one point from safety and have significantly improved their goal difference.

Spurs created the first chance of the game as early as the third minute, with Asenele Velebayi shooting wide of the target after good set-up play from Eyona Ndondo.

On 11 minutes Lincoln Vyver pulled off a good save to thwart a dangerous attack from the hosts, tipping a shot from the edge of the box by Rhulani Manzini over the top for a corner kick.

Midway through the first half the Urban Warrior created an opening for Ndondo, but with a clear sight of goal the attacker struck over the top to see the visitors fail to capitalise on some slack defending from Tshakhuma.

Vyver was called upon again 10 minutes before the end of regulation time in the first half, making a regulation save from Luvolwethu Mpeta to keep the score line blank, before Ndondo sent a shot direct from a free kick mere inches over the bar at the other end.

With half-time approaching, Spurs continued to create chances and the 41st minute saw Angolan striker Chico Bunga head wide of goal after meeting Gregory Damons’ cross from the right flank, while the 43rd had Jarrod Moroole denied by a brilliant goal line clearance from the TTM defence.

Goalless at the break after a first half in which the finishing from both teams was lacking, the early minutes of the second stanza continued in that vein, with Manzini shooting wide for Tshakhuma, before Chumani Butsaka was denied one-on-one by goalkeeper Shane Kock.

The deadlock was finally broken on the hour mark, with Spurs claiming the lead after Bunga met another fine cross from Damons and headed beyond Kock for 1-0.

TTM nearly levelled the game immediately, with Vyver called upon to make an excellent save from a free kick, before the hosts began resorting to dives in the 18-yard area to try and earn a spot kick.

The Urban Warriors weathered a storm from the hosts before doubling their lead on 80 minutes, as Jairo Da Silva netted with a header from Mosiatlhaga Abednego’s cross to put clear daylight between the teams.

The Cape side then clicked through the gears in the dying minutes, adding to their advantage through Abednego and Ashley Cupido in the 90th and 92nd minutes to wrap up an emphatic 4-0 win.

Spurs’ next GAC assignment will see them welcome JDR Stars to the Athlone Stadium on the afternoon of Sunday 28 November.