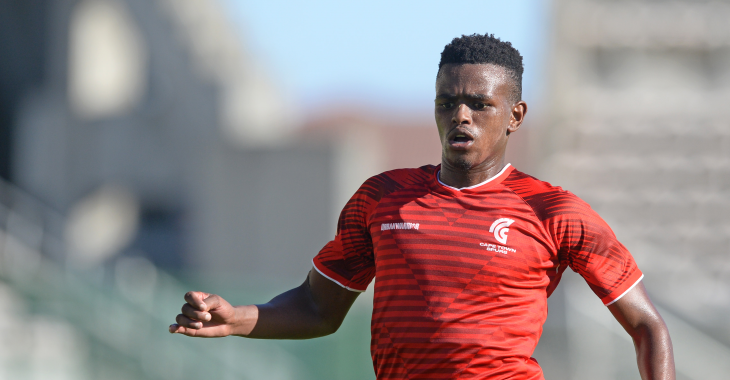 Despite a valiant effort from Cape Town Spurs, Black Leopards claimed all three points at the Thohoyandou Stadium in a 2-1 victory on Sunday in a GladAfrica Championship game.

The Urban Warriors looked lively during the early exchanges of the encounter as Gregory Damons found Tyrique Bartlett on the edge of the opposition area in the 8th minute, as the striker’s shot whistled over the bar.

Moments later, Leopards threatened after making their way through the Spurs defence, however Jairo Da Silva showcased his bravery in putting his body on the line to stop the effort.

As the game gathered momentum, Spurs were awarded with a couple of set-piece opportunities. In the 14th minute, Eyona Ndondo whipped in a cross that found the head of Rushwin Dortley, however his effort flew over the crossbar.

Three minutes later, Ndondo stood over the free-kick as he managed to find Bartlett, who laid the ball off to Abednigo Mosiathlaga via his chest but was unable to capitalise on the clever bit of play.

The Urban Warriors looked efficient with their crossing throughout the course of the first half, with Collin Ryan getting in on the act in finding Bartlett upfront.

In the 40th minute of the game, Leopards were awarded a penalty and subsequently took the lead just before the half-time break. Despite a number of efforts to draw level just before the whistle, it was not to be for the Urban Warriors in the first 45.

Five minutes after the break, Bartlett had a go at the Leopards goalkeeper as he found himself leaping in keeping the Spurs man at bay. The Spurs pressure paid off just before the hour mark as the equalised via the penalty spot with Ndondo getting his name on the scoresheet.

Bartlett’s charges pressed throughout the second half as he began making reinforcements to his side. Despite a decent 45, Spurs were unfortunate to concede late in the game as leopards took the lead in the 88th minute, claiming al three points in the process.