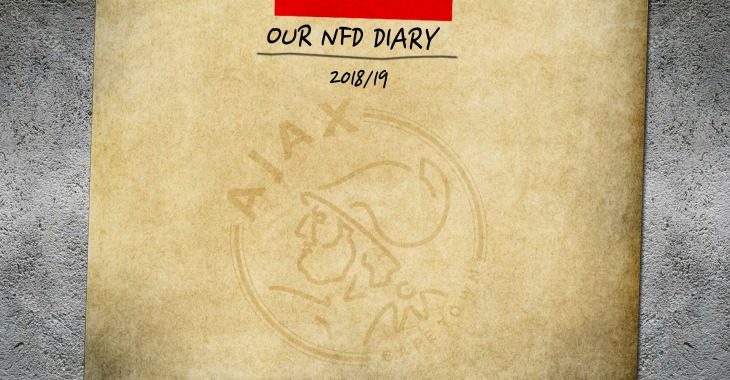 No one ever said it was going to be easy, but please be kind to us today as we embark on this new journey…(I said to myself as we boarded the plane to Johannesburg this past weekend).

On the 18th of August 2018 Ajax Cape Town traveled up to Johannesburg for the club’s first ever match in South Africa’s second division. (No the National First Division (NFD) is not the country’s top tier even if that would also suffice as a suitable name).

Alas, it was the start of something new, something different and something unexpected even if we were warned that the NFD is vastly different to that of the Absa Premiership – “it is a different beast” as one distinguished reporter tweeted.

The Urban Warriors departed for OR Tambo Airport at 16h05 on the day before the game, joined by our new noisy neighbours – Cape Umoya United – on the same flight.

A few familiar faces made for an easier trip up north, but as soon as we walked out into the Johannesburg cold we knew s**t was about to get real.

We arrived to be welcomed by a much more humbling travelling party which consisted of a twenty-eight seat van/bus which was far smaller than the usual sixty seater Premier Soccer League (PSL) luxury automobile.

We were soon welcomed at the Birchwood Hotel, in extremely chilly temperatures where the team would enjoy an over night stay and be catered to for dinner – Dinner is my favourtie meal of the day!

Having picked up CEO Ari Efstathiou at the OR Tambo International Airport on Sunday morning it was time to make the 30 minute trip to Vosloorus Stadium, which was the final destination and venue for our maiden NFD clash after many uncertainties leading up to where the game would be hosted.

The match was originally scheduled to take place in Vosloorus before it was communicated that Tembisa would host our NFD opener. The venue, though, was changed back to Vosloorus a few days before the match…

It was raised in the meeting that the pitch had some flaws in terms of line markings [Colombian jokes aside] whereby there were two lines within the 18-yard box, goal area and this – obviously – is not ideal for officials (I thought I had double vision) due to it creating confusion on potential crucial refereeing calls.

More problems were soon encountered as there were no ground staff on stand by to attend to the situation and this called upon the match being put on hold.

Soon ground staff popped out of the clear blue sky following the match officials intervention [My size helped in this aspect as well – I knew those hours in the gym would pay off eventually] and were duly deployed to rectify the situation.

Furthermore, the pitch was relatively dry and a bit bumpy and was not the best suited for Ajax Cape Town’s style of play, but in the end the pitch is equally good or bad for both teams!

Brandon Petersen was named captain by head coach Muhsin Ertugral and having come through the ranks at the club, the decision seemed suitably fitting as we were about embark on this new challenge. – (6 of the starting 11 played for the club’s Youth Academy). #OurYouthOurFuture

A total of six yellow cards were issued to Ajax Cape Town players, showcasing a new squad finding their paces and despite giving away a late penalty the Urban Warriors showed massive soccer balls to grab the winner with six minutes of regulation time remaining.

Prince Nxumalo with a sublime strike to guide us to a vital win. After all his personal challenges over the past few seasons it was great to see him kick-start the season in the best way possible!

In all, a fairy-tale start to life in the NFD for us. As I take my seat in row 5.3 B I now channel my thoughts to what is to come, as I set my sights on Platinum Stars….see you soon “neighbours”.