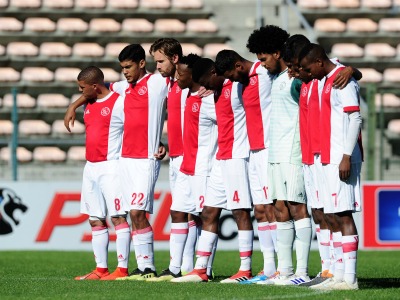 Ajax Cape Town have surrendered their advantage for a place in the Premier Soccer League/National First Division playoffs after they disappointingly lost 1-2 to Uthongathi FC at Athlone stadium on Sunday afternoon.

As a result, the Urban Warriors has relinquished the all-important third place to Tshakhuma Tsha Madzivhandila (TTM) in the National First Division (NFD). Both teams are now on 48 points but TTM are third virtue of their superior goal difference going into the last game of the season.

This was a must win game for the Urban Warriors ahead of the final match of the season but Andries Ulderink’s boys seemed to struggle to handle the pressure, despite being given a 45th-minute lead by Rodrick Kabwe.

Uthongathi were the better side in the first 45 minutes and were not deterred by Kabwe’s goal on the stroke of halftime as they continued to dominate the game after the break.

Ajax’s lead was cancelled out by Sibusiso Magaqa in the 63rd minute before Menzi Ndwandwe scored the winner for the visitors with only five minutes left, leaving the home fans dejected.

Coach Andries Ulderink was clearly disappointed with the performance.

“The performance is frustrating in a way and the result is disappointing. This is the first or the second game that the opponents are way better than us. They outplayed us everywhere, every moment. Defensively, we struggled on the ball, they pressed us really good and they outplayed us.

“I have got no problem with the loss, I am disappointed with our performance, do not get me wrong.” Ulderink said after the game.

Coach Ulderink said the team need to leave the loss behind going into the last game of the season.

“We have to leave this behind us and get the engine going again towards the last game.

“In sport, it is about winning and losing, and if you lose, you have to bounce back. If you do not show me this week that you can bounce back and you are disappointed or you cannot give something extra. Then, you are not a professional football player and you are not an Ajax Cape Town player in a long term.” Ulderink concluded.

The Urban Warriors travel to Kanyamazane Stadium on Sunday to face Mbombela United hoping to win the game and overturn TTM’s superior goal difference – TTM’s goal difference is 11 while Ajax is on 10.