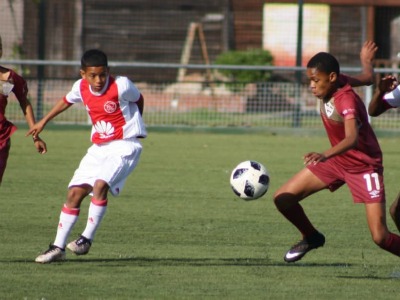 Tough weekend for the Ajax Youth teams against Stellenbosch in Stellenbosch on Saturday the 11th of May 2019
It all started with a draw in the morning as our U/12 where held to a 1 All Draw by Stellenbosch U/12 Team.

That was followed by an exciting 4 -3 win for our U/14 Team who edged a very determined Stellenbosch team who refused to give up. But our team managed to finished the game victorious.

That proved to be our last victory for the day as the host team showed more determination to beat both our U/16 and U/18 Teams with a 3-1 and 2-1 respectively.

It wasn’t to be our day as both games where won by worthy winners and we would like to congratulate Stellenbosch FC for deserved wins and for being such a great hosts.

At Ikamva our ABC Motsepe Team where 6-2 to winners against already relegated Mbekweni Sundowns in a 15h00 kick-off game.