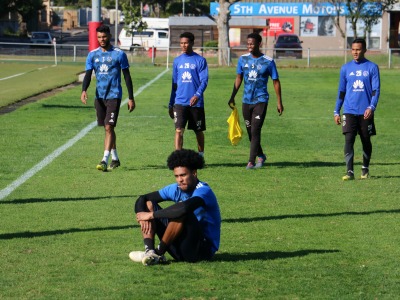 Having missed out by the narrowest of margins in a thrilling play-off race, The Ajax Cape Town team had their last official training session for the season this morning with no less than 10 players bidding farewell to their teammates and the club.

This was not the kind of season the club wished for as hopes for play-offs or an automatic return back to the PSL alluded us in the final league match of the season.

While the team will be busy behind the scenes planning the way forward, they had to say their goodbye’s to some of the players who will not be part of the team next season.

Players Out of Contract:

Brandon Petersen – Club Captain, joined Ajax Cape Town Youth development in 2014, has decided to challenge himself by moving up North as of the 1st of July 2019.

Tashreeq Morris is the most notable player in the list after being with Ajax Cape Town for 15 years since joining as a Youth Academy player in 2004, he has also decided to explore a new challenge.

Prince Nxumalo – After serving the club well in the last 4 years with his most notable memory being scoring 15 goals in season 2015/2016, Prince has a decided a change of environment will help him regain his scoring touch.

Sirgio Kammies – One of the Ajax Cape Town Youth Graduates who has been with Ajax Cape Town FC for 7 years has also left the club on expiry of his contract.

Kaketso Majadibodu – Harold was on loan from Mamelodi Sundowns till the end of the current season, so Ajax Cape Town would like to wish Harold all the best for the future.

For the following players the Club chose not to exercise the option to extend their contracts:

Ajax Cape Town would like to thank all the players for their dedication during their time at the club, and we wish them every success in their future in endeavours.