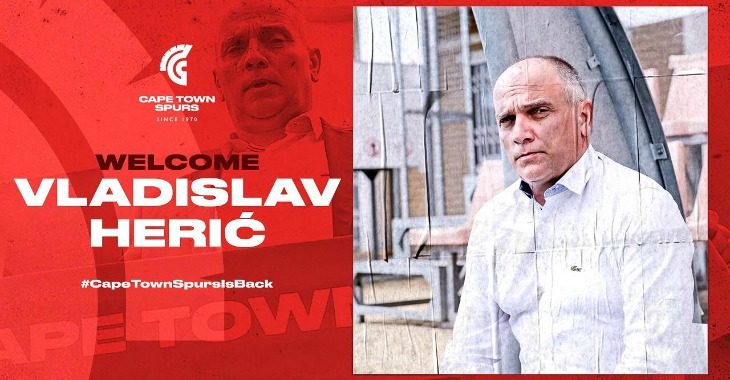 Vladislav Heric has been appointed as the head coach of Cape Town Spurs.

The Urban Warriors have called on the experienced 54-year-old in a bid to gain promotion to the DStv Premiership after narrowly missing out on GladAfrica Championship glory last season.

Heric returns to Ikamva where he previously coached the club’s MultiChoice Diski Challenge team. He also achieved huge success with the Urban Warriors youth and successfully led the club’s U19 team to ESAD and NextGen glory in the Netherlands four years ago.

“I am very happy to be back at Ikamva. Ikamva is one of the best football training facilities in the country. Everything starts from scratch for me, I look at this as a new challenge and I believe that we can be successful,” said Heric.

“We have to set goals, set objectives and we will all have to work very hard to achieve these goals. I know the club is ready to do that.”

The Cape Town Spurs name makes a return to South African football for the first time since 1999 when Spurs and Seven Stars merged to form Ajax Cape Town.

Heric, who boasts a lot of coaching experience in South Africa’s top two divisions, won promotion from the National First Division (now GladAfrica Championship) to the Absa Premiership (now DStv Premiership) with Chippa United in 2014 — he is now confident of leading Spurs into the elite league.

“Everyone has to work to their job description to achieve the goals we set out and push the limits of the job description that will be given to every single person at this club. We have to be like one, we have to work like one. That is the major objective to achieve in order to achieve promotion,” Heric continued.

Moreover, Heric voiced his commitment to Spurs’ youth policy with the club boasting some of the country’s top youth internationals.

“I believe that we won’t change that much from a development point of view. The club remains focused on developing players and we will maintain that approach heading into the new season,” he concluded.