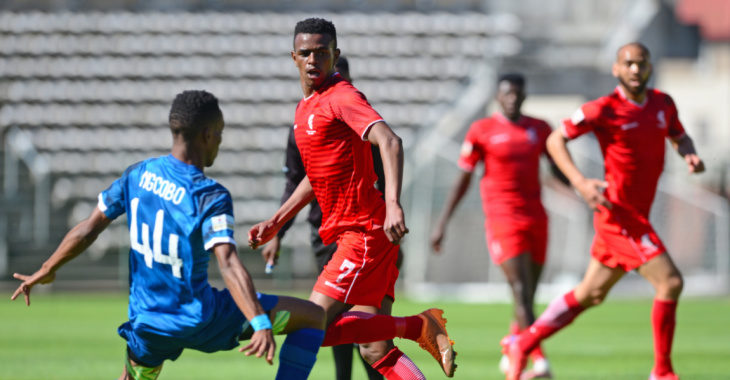 Cape Town Spurs were guilty of missing a catalogue of goalscoring chances in a 0-0 draw against Platinum City Rovers, in a 2021/22 GladAfrica Championship match at Athlone Stadium on Sunday afternoon.

The hosts created chances aplenty throughout the course of 90 minutes, but were unable to take any, as the game ultimately ended goalless.

Diassonama Bunga, Chumani Butsaka, Kennedy Amutenya and Eyona Ndondo all had goalscoring chances in the opening half-hour, the best of which fell to the latter who was unlucky to watch his attempt canon off the crossbar.

Jarrod Moroole then watched his header attempt sail into the grateful arms of the City Rovers goalkeeper moments later but despite all the positive play, Spurs just couldn’t find the decisive touch.

That continued after the break as Butsaka was again denied by the opposition goalkeeper before Rovers finally conjured a chance of their own in the 78th minute. Lincoln Vyver did well to palm a shot from range onto the woodwork before pouncing on the rebound to deny the visitors.

Spurs ended the game strongly and should’ve hit the front in the 86th minute, but Bunga missed the target with the goal at his mercy, and in the end, the Urban Warriors had to settle for a point.