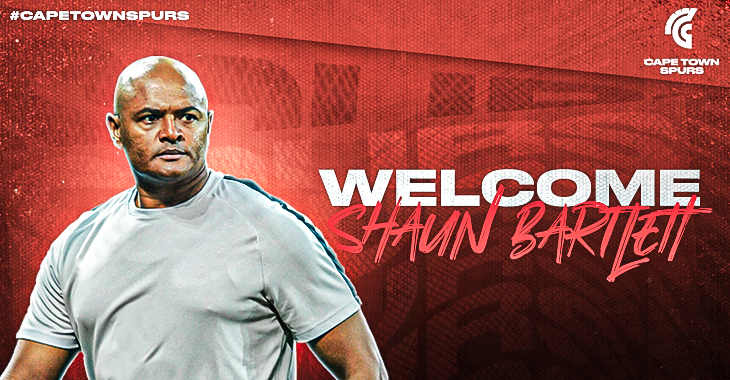 Cape Town Spurs is delighted to confirm the appointment of Shaun Bartlett as our new head coach.

Bartlett, 48, arrived at Ikamva on Monday and will be on the touchline for our match away to AmaTuks in the 2021/22 GladAfrica Championship on Wednesday.

Bartlett previously played for Spurs in the early 1990’s and returned for a successful loan-spell in 1997. This would set the foundation for a glittering career which also took him to the United States of America, Switzerland and England, where he notably established himself as a household name at Charlton Athletic.

The former Bafana Bafana international, who was part of the South African side that won the 1996 Africa Cup of Nations, ventured into coaching after hanging up his playing boots in 2009.

Bartlett enjoyed immediate success as a head coach by guiding Golden Arrows to National First Division (now GladAfrica Championship) glory in 2015, before taking over the reins at AmaTuks. His time at the University of Pretoria was followed by assistant coaching roles at Kaizer Chiefs, Bafana Bafana and most recently TS Galaxy.

“I am excited about the appointment, it caught me by surprise having only left my previous employer not too long ago,” Bartlett told capetownspurs.co.za “But I am very happy to be back in Cape Town and the prospect of working with the players and seeing how far we can push it to get back to the elite level where I believe the club belongs.

“There is good enough quality at the club to get the club higher up on the table, firstly and secondly, no player or club becomes bad overnight. When you hit a stumbling block it is about having the mental strength and psychological capabilities to get out of it and that is what the players need to realise,” Bartlett added. “We are not always going to win every game, we just need to know how to bounce back and that is what we will be working on.

The new Urban Warriors boss continued: “I think the players also realise that they have been employed by the club to do a certain job and everybody will understand that, that job means giving 100% the minute you come through the gates, whether it be for training or on matchday. That is the mentality and mindset that we will have for the rest of the season, starting with the next game.”

The former Bafana Bafana forward is excited to be working with Bevan Fransman once more, and underlined the importance of striking a good balance between youth and experience. Fransman, club captain at Ikamva, worked with Bartlett during his time at TS Galaxy.

“Everybody will be treated the same but I always have a saying: ‘some are more equal to others’. I can’t treat Bevan the same as a young player coming into the team. Bevan’s experience will be vital, having worked with him before. He is a true professional, he always looks after himself and he is a true leader, and for me that’s going to be important especially considering the situation we currently find ourselves in. You need that leadership on the field.”

Bartlett boasts considerable experience across both of South Africa’s top two divisions and while there might be striking differences between the two, the mandate and fundamentals remains the same for any team: to win.

A serial winner himself, Bartlett understands the structures needed to achieve success and is confident that with time he can help Spurs climb to the summit of the GladAfrica Championship standings.

“To be honest, whether it be the DStv Premiership or GladAfrica Championship, every game is about results and that is what coaching is about as well. You’ve got to make your players understand that, we don’t play just to keep possession, we’ve got to make sure that we score goals and win games. That is what we will be judged on and we have got to ensure that we do everything possible to get those results,” Bartlett stated.

“The only difference maybe between the two leagues is that in the GladAfrica Championship the incentives are there for you to get to the top league and that is what we are going to try and do from the first game; is to make sure that we get as many points as possible leading up to the break in December and take it from there.

“At this point in time it is game by game, I always look at it as a ladder: the first step is on Wednesday. It is small steps in order to get to the top, but we will take it one step at a time,” he concluded.