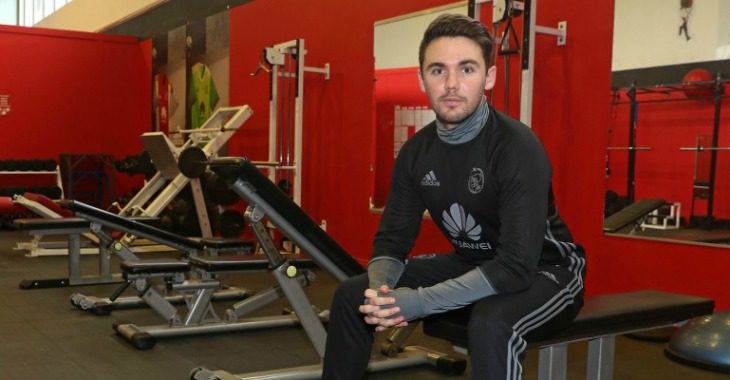 In the latest ‘Get To Know’ segment we caught up with Ajax Cape Town Youth Academy Sport Scientist and Strength and Conditioning Coach, Ryan White.

At 24, White is one of the youngest employees at the club, with the Stellenbosch University graduate having found the perfect balance between work and well, more work…

Ajax Cape Town have 6 designated Youth Teams (U12, U13, U14, U15, U18 and Young Ajax), with the Young Ajax squad also forming part of the Urban Warriors’ ABC Motsepe and MultiChoice Diski Challenge teams.

Q: Ryan, thanks for chatting to us. You recently joined the Urban Warriors as a permanent employee…tell us a bit more about what you do at the club…

“I am the Academy Sport Scientist and Strength and Conditioning Coach, I am working with all the youth teams from U12 -U18 with Kurt [Hensberg] moving to ABC Motsepe and MultiChoice Diski Challenge teams.

“Every day comprises pretty much of me being out on the field with the players. We have gym sessions from U14 and upwards, U15 and U18 have two gym sessions a week [Monday &Thursday], where as U14 only have one gym session a week.

“Otherwise we are out in the field doing speed and agility or general conditioning, football conditioning. Working with our coaches to make sure everything runs smoothly. In edition to that, we do pretty extensive monitoring of our players to better their performance come matchday.

“On Saturday’s [matchday], we conduct warm-ups and do pre-activation’s and so forth. On Sunday’s it is prep for the week to come, so it is pretty much non-stop.

Q: Exactly what did you study, and you are currently doing your Masters? Can you elaborate…

Q: Has it always been your passion to work in sport as a career?

“I actually got into it because I wanted to further my own athletic career, but got to the point where I had to make a choice between the two. I wanted to move into football because it is a passion of mine, but I made the decision and I find it really rewarding working with the Youth and seeing them achieve, and hopefully going on to play in the PSL and beyond.

Q: I understand that one of your former classmates is working at Cape Town City? Must be nice to have that sort of rivalry going as well…

“Lee John Miles is at Cape Town City now and he is taking care of their Diski team, while also working with their PSL squad. Another classmate of mine, Ben Mackenzie, is at Leicester City Football Club (England), so yes we have a good wide network of sport scientists across the world.

Every week we will take a closer look at those working behind the scenes at Ajax Cape Town.