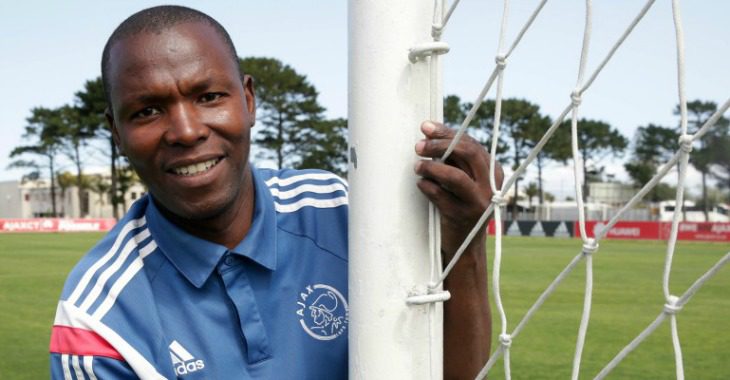 In the latest ‘Get To Know’ segment on ajaxct.co.za we caught up with Ajax Cape Town Groundsman & general handyman, Khayalethu ‘KK’ Malongwe.

Originally from the Transkei in the Eastern Cape, Malongwe first moved to the ‘Mother City’ to complete high school, and has been residing in Khayelitsha since his teen years.

Having started his Urban Warriors career in February 2002, Malongwe has welcomed several roles at the club. Having initially joined the club in his current capacity, he worked as a driver in 2006 & 2007 [transporting the youth academy players to Ikamva and back home], but was recalled to his original position soon after – he also chips in with general maintenance work

Malongwe is by all means – and in his own yards – “old furniture” with the fresh-faced groundsman having started his career with Cape Town Spurs. Following a brief spell with Santos, he kicked-off his Ajax Cape Town chapter 15 years ago.

“It is my passion, working hand-in-hand with the players, watching the young players grow up in front of your eyes; coming here as kids and leaving to clubs in Europe, like Leo [Thethani] ,Dean [Solomons], Steven [Pienaar] and Thulani [Serero],” ‘KK’ fondly reflects when asked about his job at the club.

“My time here has been fantastic, to see so many people from across the world coming to visit these grounds, to work at a professional club – it’s a dream come true.

So what exactly does a normal day in KK’s life entail?

“Rob Moore used to say: ‘If there is no lines on the field there is no game’, so I make sure the lines are painted, that the field is cut and then I do general maintenance, ensuring that the property is neat and clean. This is an important role, because Ikamva is the face of Ajax Cape Town and people know ‘KK’ is responsible,” he added with a smile.

KK has come a long way with several colleagues at the club, including Albert Hendricks [Kitman], and Luis De Faria [Chief Scout] with the duo having played a role in coming up with his nickname.

“To work with an old man like Albert is great for me, he has given me a lot of advice over the years. It was he and Luis who came up with my nickname ‘KK’…. Khayalethu from Khayelitsha.

Asked about his fondest memories and favourite player to climb to prominence at Ikamva, he was quick to respond:

“Bryce Moon is my favourite player – my favourite thing, though, is watching the U12 teams. Especially the team we have at the moment, they are really exciting and they play the Ajax Cape Town way.

“I also love the excitement when the team is winning and watching the boys in training,” he concluded.