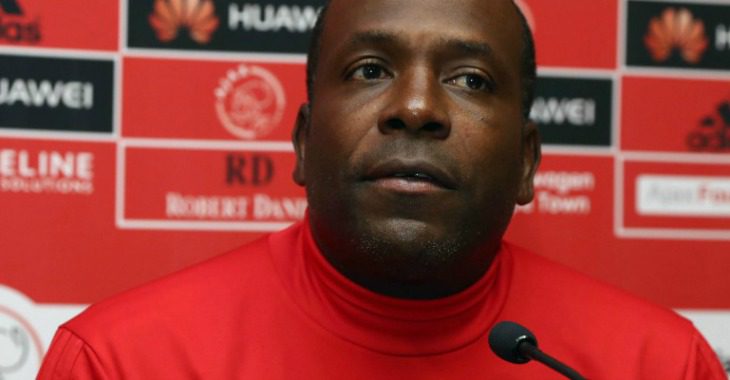 Head coach Stanley Menzo has shared his thoughts on a tricky away fixture to Absa Premiership high-flyers Baroka FC at the Peter Mokaba Stadium on Saturday.

The Urban Warriors jet off to Polokwane on Friday morning, ahead a crucial showdown in the Limpopo province – seven days before our highly anticipated Cape Town Derby clash in the Mother City.

Menzo’s troops got their campaign up and running against Polokwane City last Friday, a double from Prince Nxumalo leading the club to all three points.

Bakgaga have made a storming start to the season having accumulated 11 points from five fixtures and Menzo is under no illusion of the task awaiting his team this weekend:

“It will be a tough match. Knowing them, they run 90 minutes plus, non-stop. They go everywhere on the field. You can say they are not structured, but that is dangerous, you don’t really know how to approach them,” said Menzo.

“So, it is up to us to play our own game and I told the boys that we need to keep hold of possession and make sure we don’t fall into their way of playing because that is not our style and not our strength.

“It will be a fight, but we must rise to the occasion and fight. If we can play, we must play. We can’t afford to give them any space. We have to stick to our structure.

“That win [vs Polokwane City] was very important, but again, we are not there yet. We still have to improve a lot and we know that. But, yes, the win did give us more confidence,” Menzo continued.

“Baroka are a good example – they look a different team after a few wins. We need to replicate that.

Nxumalo proved his pedigree once more with a double last weekend, but Prince will not be making the trip up north. He along with winger Innocent Nemukondeni have been ruled out of the clash due to injury. In positive news, Grant Margeman looks set to make a return.

The former Dutch international added: “Prince, he has a groin strain, he failed to train the whole week and he won’t be travelling with us. Innocent, he is also not making the trip, he picked up a knock to his ankle in the MultiChoice Diski Challenge.

“At this moment that is it. Grant is okay, but we need to take care of him. It is a long season, he played a lot of games for club and country last season.

Baroka head coach Kgoloko Thobejane is a confident man, and Menzo has picked up on his opposite number’s coaching style. With Thobejane having predicted that his club would clinch the league title, Menzo warned that one should expect anything when it comes to football…

“The Baroka coach said they will win the league – maybe he is a visionary. Football is strange,” Menzo concluded.

In head-to-head stats, Baroka and Ajax have met in just two previous league matches. Both of those encounters took place last season, with the first meeting in Polokwane ending in a 1-1 draw, while the return game on the final day of the campaign saw Bakgaga claim a vital 1-0 win in Cape Town.