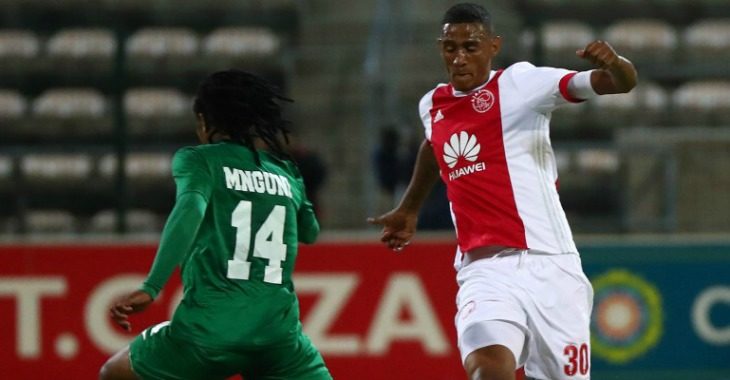 Ajax Cape Town will renew their rivalry with SuperSport United in an Absa Premiership showdown at Mbombela Stadium in Nelspruit on Wednesday evening. Kick-off is at 19h30 CAT.

The Urban Warriors conceded two stoppage-time goals in a 2-2 stalemate against AmaZulu this past weekend, having looked sure to bag all three points following goals from Masilake Phohlongo and Tashreeq Morris.

The result hurt Stanley Menzo and his troops, as they now aim to make things right with victory in the Mpumalanga province. Similarly, Matsatsantsa are seeking their own source of redemption following defeat to TP Mazembe in the 2017 CAF Confederations Cup final.

Former SuperSport United defender Mario Booysen, who completed a return back to Ikamva at the end of August, is looking forward to an entertaining encounter in midweek.

“They [SuperSport United] will be hurting, from a personal point of view I know it is not nice to lose in a final,” said Booysen. “Especially when there is a lot on the line.

“I think they will come out and try and make things right against us because they are behind in the league and will want to get back to where they feel they belong. They have an experienced squad, we respect that, but we should focus on ourselves and what we can do.

“Both teams are bruised, we had to win our game on Saturday in all fairness, but yes, we can take advantage. But, we have to apply ourselves correctly. We don’t have a good away record at this point in time, but we have an opportunity to change all that on Wednesday.”

Moreover, the 29-year-old lamented the kind of goals conceded by Ajax Cape Town this season and despite a poor run of form, Booysen is confident that the club are on the right track…

“If you look at it overall‚ it is not goals [conceded] that other teams have had to work for‚ it’s soft goals‚” Booysen added.

“But, the team is gelling together nicely now. On Saturday we were the better team without a doubt‚ but we are still conceding [soft] goals.

“Definitely we are on the right track‚ if you look at the performances overall I think the team is doing well.It is a lack of concentration from everyone‚ that is one of the small things we have to sort out,” he concluded.

In head-to-head stats, SuperSport United and Ajax Cape Town have met in 36 league matches since the 1999/2000 season. Matsatsantsa have claimed 14 wins compared to 12 for the Urban Warriors, while 10 matches have been drawn.

The Tshwane side has won eight of their 18 home league matches against their Cape Town counterparts, suffering six defeats in the process.

Last season United took four points off Ajax, winning 2-0 in the Mother City in the first half of the campaign before playing out a goalless draw in the reverse fixture. The last six league meetings between these teams have failed to produce a home win.