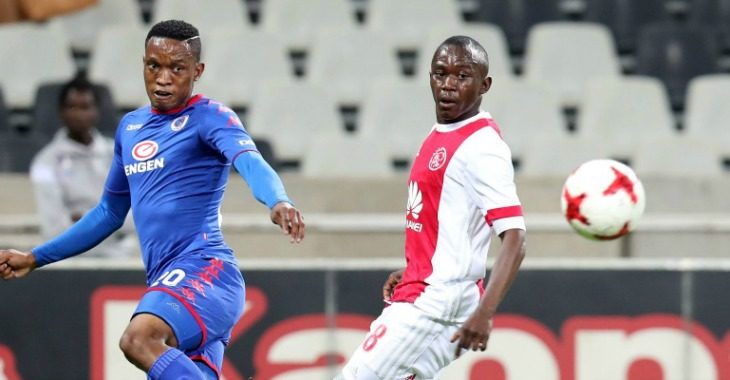 SuperSport United held on to beat Ajax Cape Town 1-0 in an Absa Premiership clash at the Mbombela Stadium in Nelspruit on Wednesday evening.

It was a game of two halves, with the Urban Warriors a different unit following a first half dominated by Matsatsantsa. Stanley Menzo’s troops, though, failed to turn dominance into goals as they slumped to defeat in the Mpumalanga province.

Following a rather cagey opening to the encounter, Matsatsantsa hit the front through Aubrey Modiba in the 25th minute.

Richard Kissi Boateng the provider with the fullback’s curling cross expertly met by Modiba who lost his marker before nodding home from close range – Jody February with no chance.

The Urban Warriors shot-stopper was called into action to keep out Fagrie Lakay’s long range shot soon after, before getting down well to deny former Ajax Cape Town striker Bradley Grobler.

The forward’s rasping effort from the edge of the area looked destined for the back of the net, but February was up to the task.

Matsatsantsa 1-0 up at the interval and deservedly so.

The Urban Warriors came out firing following the break and were unlucky not to draw level in the 56th minute through Mosa Lebusa.

The Ajax Cape Town captain took it upon himself to lead his chargers in attack, but Reyaad Pieterse denied the fullback from close range.

Tashreeq Morris then saw his powerful effort saved by the SuperSport goal-minder as the Urban Warriors looked sure to get something out of the clash.

But, despite an improved showing in the second stanza, the visitors were unable to conjure a goal as SuperSport held on for all three points. Victory moves the hosts up to 10th spot – Ajax Cape Town remain in 14th place on the log standings.