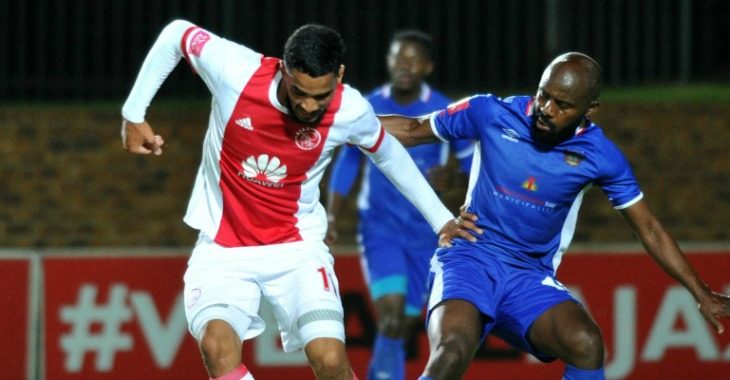 Ajax Cape Town returned to winning ways with a hard-fought 1-0 win over Chippa United at Bidvest Stadium in Johannesburg on Saturday evening.

The Chilli Boys ended the game with 9-men with Zitha Macheke and Daniel Akpeyi receiving their marching orders for the visitors in a fiercely contested battle.

In the end, Mosadi’s first-half rocket proved to be the difference between the two sides as the Cape club move up to 13th place on the log standings – a mere seven points off top spot.

Following an end-to-end start to the clash, the goal finally came with 27 minutes on the clock. Grant Margeman sending Mosadi on his bike with the wing-wizard making no mistake with his finish; as he fired an unstoppable shot past Akpeyi from a tight angle.

Things went from bad to worse for the visitors as Macheke received his marching orders soon after for a tough tackle on Mosadi.

The Chilli Boys a goal and man down at the interval.

Despite their numerical disadvantage, Chippa United head coach Teboho Moloi introduced no fewer than three attackers before the hour mark as the Eastern Cape outfit went in search of all three points.

Chances, though, were hard to come by as Stanley Menzo’s troops remained resilient while also posing a threat on the counter-attack.

The Urban Warriors looked sure to finally put the game to bed in the final minute of stoppage-time, but Akpeyi stopped a goal bound Mosadi dead in his tracks with a rugby-like tackle. The match official left with little choice but to brandish the red card once more.

Ajax Cape Town claiming all three points to cap off a successful week in the Gauteng province for the Mother City outfit.