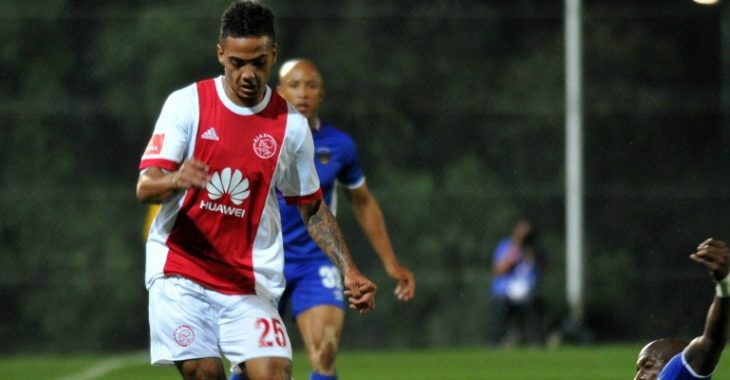 This time last week, Ajax Cape Town Academy Graduate Sirigo Kammies was not to know that he would be making his long-awaited Premier Soccer League (PSL) debut.

Kammies has battled tirelessly in trying to break into the First Team starting 11 and hard work and dedication finally paid dividends for the 19-year-old as Stanley Menzo gave him his dues in an Absa Premeirship clash away to Bidvest Wits, last Wednesday.

The right-back was included in the Amajita squad for the on-going 2017 U20 COSAFA Cup in Zambia, but Menzo decided instead not to release Kammies for national duty as he intended to utilize the forward-thinking fullback…

“I didn’t know that I was going to play and when the coach informed me that I will not be going to Zambia for the COSAFA Cup I was a bit upset because I was positive that I’d play, and be in the starting 11 there,” Kammies admitted.

“But, then when we went on camp [in Johannesburg], the coach announced the team and I must admit that I was shocked to be included from the onset against Bidvest Wits. I didn’t expect it to happen and at the time I was very nervous.

“It was going to be my first game. But after my teammates spoke to me and told me that they will have my back – talk me through the match and not have a go at me, but encourage me instead – I felt calm. For me, personally, I felt good. For the first time in a long time, it felt like I had a really good match.

Having starred in a goalless draw against the defending champion Clever Boys, Kammies put in another solid shift as Ajax Cape Town registered a 1-0 win over Chippa United at the same venue three days later.

“We felt confident following the Bidvest Wits game and going into this past weekend’s match we just wanted to keep the same discipline. If you don’t concede you won’t lose.

Born in Elsies River, a mere 10 minute drive from Ikamva, Kammies has had to overcome numerous difficulties to be where he finds himself today…

“A lot of the players like Brandon Petersen has encouraged me a lot, every day at training I work hard and away from the pitch I remain focused, I never relax. I just keep on going.

“It feels great, the community I come from there is a lot of gangster-ism and not a lot of people ‘make it’. So, I just want send out a few words of encouragement to everyone from my neighbourhood – never let anyone tell you that you are not good enough. Keep working hard and you will achieve all your goals,” Kammies concluded.