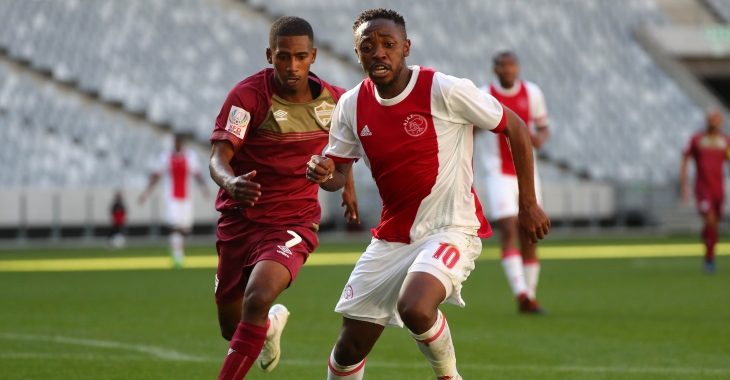 Ajax Cape Town midfielder Raymond Monama started his first game for the club in a 1-0 win over Stellenbosch FC this past weekend. The Urban Warriors No.10 impressed in the middle of the park at Cape Town Stadium alongside Grant Margeman and Gerald Takwara, as the club extended their unbeaten start to the 2018-19 NFD season.

What did you make of the match?

“For me it was great, we supported each other the entire game, we had a lot of training throughout the past week during which we also focused on finding space, the coaches were on our case the entire time and it paid off well. We definitely deserved the win today [Saturday] because of the way we played”

Is it about getting the team on another level after the two week international break?

“It will be a great two week period, we need these two weeks to try and understand each other during training as we are a relatively new team. new group of players. With coach Muhsin [Ertugral] on our side during this two week break we will most certainly be a better team than we were today.”

What are the differences between the Absa Premiership and NFD based on the encounters faced thus far?

“The NFD has always been the same, it’s hard running so you have to work hard, but I think the good thing with us is the organization and structure of the team is good. We are not conceding, we only conceded one goal against Jomo Cosmos.

“We just need to score more goals as you saw today we missed a lot of opportunities. If we are able to keep the same form, not concede and score more goals, by the December break we will find ourselves in a good position to run for the league. ”

How would you describe your contribution to the team?

“My contribution is more teamwork based, I have to do what the coach instructs me to do. Where I can put some expertise and experience I will do so. Mainly I must try not to do anything extravagant, I should stick to the game plan and what is expected from me. I have to get on the pitch when called upon by the coach and help the team.”

Are you concerned by the lack of goals considering the amount of chances created?

“Chances will come, we have good strikers such as [Tashreeq] Morris, Prince [Nxumalo], a lot of players that can strike the ball. It is just a matter of a moment, the sooner we start scoring goals then goals will flow in every match that we play and they will start coming.”