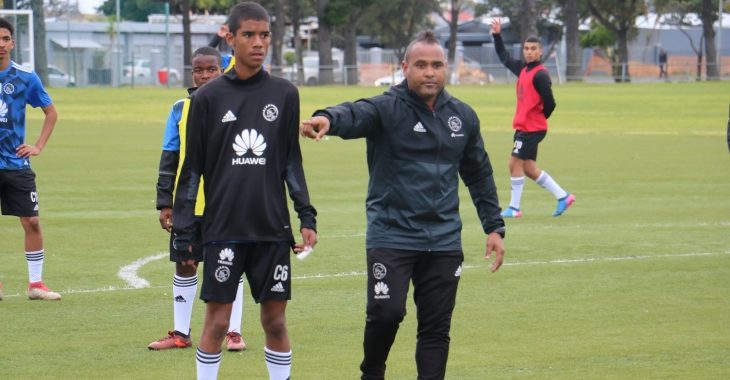 Ajax Cape Town U16 head coach Rowan Hendricks has revealed that he initially found the transition from player to coach very difficult.

Hendricks guided the U16’s to CTTFA Knockout Cup glory in Northpine last month to cap what has been a successful first year back at Ikamva for the former Urban Warriors attacker.

“When I look back at the season, and I look back to when we started the word that comes to mind is consistency. Consistency in building the culture of Ajax Cape Town, the philosophy – not my philosophy, but that of the club’s – how we want to do things on and off the field. Consistency in that and also building character.

“That for me is the main things that point to a successful season, other than winning silverware.

Introspection, research and continuously asking questions has helped Hendricks in his transition into junior football coaching and the former Bafana Bafana winger is happy with what he has achieved over the past few months.

“It was in the beginning very difficult (the transition from player to coach) because I had to learn how to man-manage players other than just going after the result. It is about development, not just results.

“It is about preparing the players for longevity in their career, something that will sustain them rather than just going for the three points every weekend. Sometimes as a coach I had to calm myself down, read more and listen to other coaches, other methods of how to get the best out of the players.

“This has helped a lot because I think I’ve become a calmer coach. I have learned how to tap into players and get a good reaction instead of a negative reaction.

Hendricks continued: “I am now a coach, I had to forget about what I achieved as a player. I’ve become comfortable in what I am growing into as a coach and Rowan the player is something of the past.

“Rowan the player has died and the coach is coming to the fore, I’ve enjoyed that transition.”