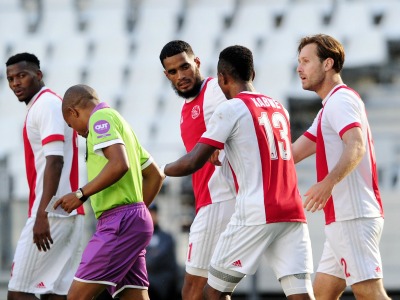 A solitary goal courtesy of Tashreeq Morris was enough for Ajax Cape Town to beat Cape Umoya United 1-0 at the Cape Town Stadium on Sunday afternoon.

Ajax is now only a point behind Log leaders, Stellenbosch FC with only three games left.

The Urban Warriors had a bright start and created couple of chances inside the opening ten minutes. Keagan Johannes and Grant Magerman were finding joy on the left side of Umoya United defence and produced two telling crosses aimed for Thabo Mosadi and Rodrick Kabwe respectively but they both failed to convert.

However, Umoya nearly took the lead in the 30th minute when former Ajax striker, Nathan Paulse was denied by the crossbar after a well-directed header.

Umoya started the second half the better side, attacking with some purpose yet they could not penetrate our defence.

In the 64th minute, Tashreeq Morris scored the only goal of the match after a beautiful turn inside the box before producing a clinical finish to the bottom left corner to make it 1-0.

Morris’ goal proved to be enough for us to collect the all-important 3 points and keep our title hopes alive.

Coach Ulderink felt a goal was always going to be enough to win the game.

“The first half we were quiet comfortable. We played some possession football, created dangerous moments but we could not finish them off.

“There were couple of moments were the opponents could maybe have scored, especially looking for their big striker [Nathan Paulse], with couple of runners around him.

“In the second half they (Umoya) played a little more aggressive going forward, especially the first 20 minutes. We did not play well. Then, there was a phase we controlled the game a little bit more and created a couple of moments.

“The goal was very important as I had all the time a feeling that the one who scored a goal will probably win the game.

Coach Ulderink said players understand what is at stake and do not need to be reminded to focus.
“Everybody know what is at stake, it is not for me to put more pressure on. Every person, every player handles pressure differently, I told the players to enjoy the game.

“I do not think I need to get the players focused with only three games to go. I know my players quiet well after four/five months working with them and they like the challenge of the way we try to play. I am not worried about the focus”

Our next game is away to fellow championship chasers, Royal Eagles on Saturday, 20 April 2019.