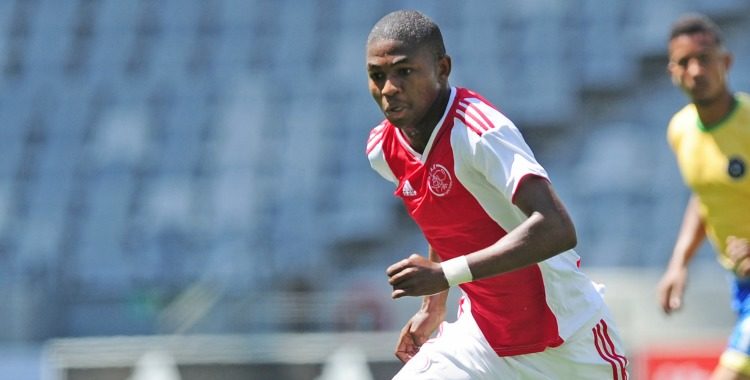 Abednigo Mosiatlhanga scored a brace as Ajax Cape Town climb to second place in GladAfrica championship with a win over newcomers and local rival Steenberg United at the Cape Town Stadium.

Andries Ulderink’s side came into the game with one change from the team that beat Royal Eagles last week with Siphesihle Mkhize starting in place of Rodrick Kabwe who started on the bench.

Mosiatlhanga opened the scoring from a penalty spot in the 7th minute. He won the penalty after being fouled in the box by Steenberg defender as he was through on goal.

Ajax pushed for the second goal but it was Steenberg who scored with 20 minute gone through former Ajax player Ruzaigh Gamaldien to make it 1-1.

The game went into the break level.

Coach Ulderink made a change at the break replacing defender Thendo Mukumela with Keagan Johannes as he wanted a bit more intensity from the right hand side.

Mosiatlhanga restored the urban Warriors’ lead in the 69th minute with a left-footed strike from inside the box after he was nicely set up by Eleazar Rodgers.

Steenberg pushed for an equaliser and were nearly rewarded in the referee’s optional time only for goalkeeper Nick Hengelman to produce a great save to make sure Ajax collect all three points.

The Urban Warriors are now two points behind leaders JDR Stars heading into the international break.

Coach Ulderink was happy with the improvement after last week’s disappointing performance.

“I thought in the second half I saw 20-25 minutes that I was quiet happy with, good intensity, won the ball back quiet quickly and scored the second goal. But it is not yet there, in the first half we had a good spell then in the 15 minutes after the goal we could wait for a goal for Steenberg as we allowed them to counter all the time.

“Just before half time we got back into our rhythm so I am a little bit happy (compared to last week)…I am very happy with a 2-1 win as I knew it would not be an easy game and very happy with two wins in a row.” Ulderink said after the game.

Ajax’s next fixture is away to Swallows FC at Dobsonville Stadium on 19 October 2019.