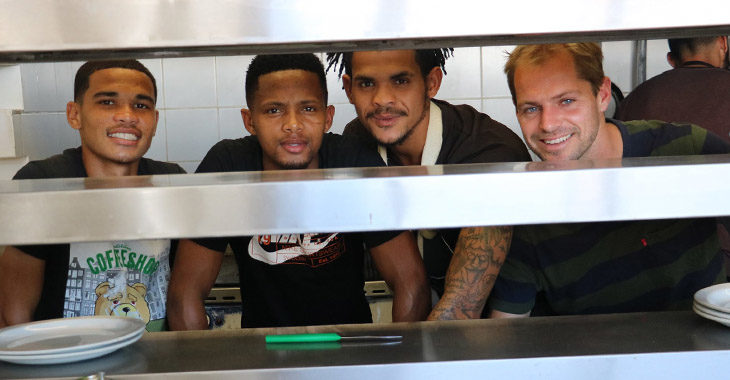 The Ajax Cape Town first team have a five-week break from matches, this means they have some time to focus on other objectives such as the understanding of nutrition and dietary needs.

The first team coaching staff put together a cook-off which comprised of two squads built up from the first team players, each team was given a leader which had to follow a meal plan and an understanding of their football schedule. The head of strength and conditioning coach, Rodet Yila said: “Most of these young men haven’t been taught the importance of meal planning and we saw an opportunity to teach the young players and do a team-building session.”

Team one pulled in with a good diverse meal with many elements as well as good flavours, there was a great atmosphere in the kitchen with lots of laughter and fun moments. The team were very pleased with their effort and the other team were very impressed by the meal.

Team two had to match the high standard of the previous meal. The team came into the kitchen with fire in their belly as there was singing and laughter which adds to the flavour of the meal. Team two were bold in their approach as they went for a stirfry which was a strong approach but the fate favours the brave as the meal turned out to be an absolute smash amongst the staff and players.

The staff deliberated the winners which turned out to be team two who managed to follow the brief as well as make a simple but delicious meal which managed to impress the right people.

Well done to everyone involved.