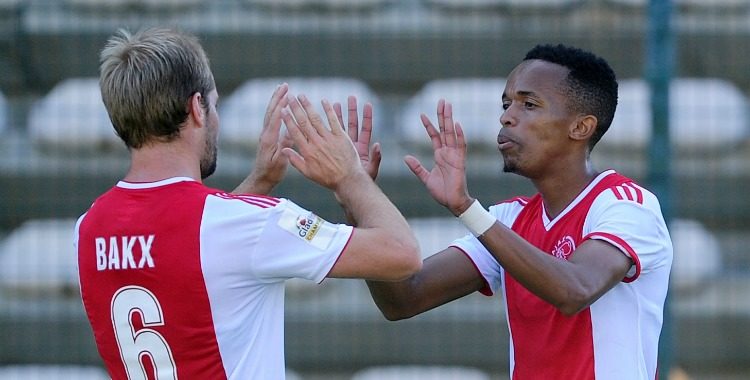 The Urban Warriors were playing first league game in over a month after their games were postponed as four players were away in Egypt with South Africa under-23 squad.

Ajax started the game very well, dominating possession of the ball but without threating JDR’s goal much as opportunities to run behind the visitors’ defence were missed.

However, it was JDR that came close to opening the scoring in the 23rd minute only to be denied by the crossbar.

The visitors were handed a second chance to score when the referee awarded them a penalty in the 41st minute but Nick Hengelman produced a great save diving to his left to keep the score 0-0 at half time.

JDR had a bright start in the second half and created couple of great opportunities to score but were denied by brilliant saves from Hengelman.

In the 59th minute, Mosiatlhaga picked up a loose ball in the box after a move between Eleazar Rodgers and Grant Margeman failed to materialise, and clinically finished with his left to make it 1-0.

Four minutes later, it was than man again, Mosiatlhaga who picked up the ball from his own half and went on a run before releasing Rodgers who shoots, the keeper saved but the ball fell to our top goal scorer who headed in his second goal to make it 2-0.

In the 83rd minute, JDR tried their luck with a strike from outside the box but Hengelman was determine to keep his first clean sheet of the season as he produced a great save, tipping the ball over the bar for a corner.

Rodgers should have added a third goal with 5 minutes left, following a good cross from Thabo Mosadi down the right flank, he couldn’t direct the cross into the empty net from a couple of metres out.

Coach Ulderink was very happy with three points against a top JDR side.

“I thought the first half we controlled the game, had a couple of good spells, created three, four moments were we threated in the box. But I thought we missed at least seven or eight moments were we should go quicker forward, a little bit more runs behind the defence to really make it more difficult for the opponents. I must be honest we were lucky with that ball on the crossbar and the missed penalty.

“Second half we came poor out of the dressing room, first 10/12 minutes was for them, they created 2 to 3 very big chances and we need to thank Nick for couple of very good saves. After we scored one and two nil, of course there was pressure from them but I was quiet calm on the bench because in that phase we hardly gave any chances away. We stayed compact and stayed organised. I am very happy with the three points.” Ulderink said after the game.

Ajax’s next fixture is away to University of Pretoria on Tuesday, 10 December.