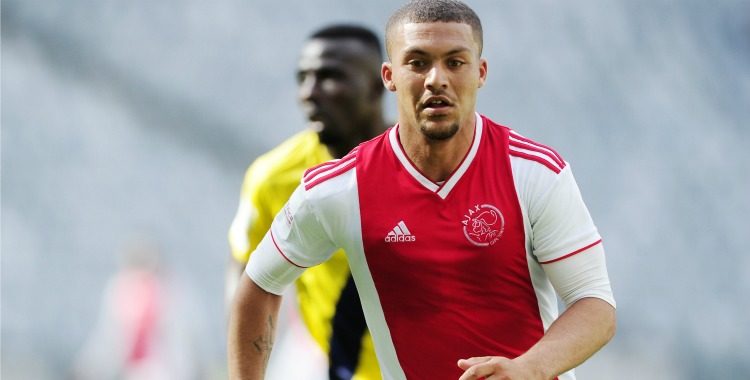 Ajax Cape Town came from behind to secure a thrilling 3-2 victory away to Richards Bay and move to within two points of log leaders Uthongathi FC.

Grant Margeman scored inside the last 10 minutes to hand the Urban Warriors all important three points at a rainy and windy Umhlathuze Sports Complex.

The Urban Warriors started the game well and created couple of chances with the best one falling to Margeman who drew a great save from the host’s keeper, Andile Mbanjwa.

But it was the hosts who took the lead against the run of play when a long range shot from Tony Zwane in the 10th minute took a bounce before going past the diving Nick Hengelman.

The Urban Warriors continued to create chances and in the 18th minute, Mosadi’s perfect cross found Cohen Stander free in the box but his right foot volley went over the bar.

Asanele Velebayi had two chances in the 23rd and 29th minutes to level matters. First, he pulled his shot narrowly wide after a pass from Mosadi. Then, he was nicely set-up by Eleazar Rodgers inside the box but the keeper was well positioned to cushion his strike.

Thendo Mukumela had another chance on the stroke of halftime but his fierce volley hit the keeper, who clearly did not know much about it.

Richards’s Bay would have been relieved to take a 1-0 lead at halftime after the Urban Warriors created numerous chances to at least have levelled matters.

In the 53rd minute, the in-form Abednigo Mosiatlhaga scored his tenth goal of the season to make it 1-1 when he slotted home a right foot strike from inside the box.

Five minutes later, Rodgers should have made it 2-1 but watched as his header from the centre of goal went agonizingly wide. The header was from another pinpoint cross from Mosadi.

Our experienced number nine redeemed himself as he scored in the 64th minute taping in a cross from Stander to give us a 2-1 lead.

Before Rodgers scored, Mosadi had a great opportunity to score after being put through on goal by a brilliant Margeman ball from his own half but Richard’s Bay keeper Mbanjwa produced a great save to deny him.

Richard’s Bay found the equalizer in the 77th minutes in controversial circumstances after Margeman appeared to have made a goal line clearance but the officials awarded a goal to Yurigg Conwood.

The Urban Warriors found the all-important winner in the 84th minute through Margeman. Rodgers’ through ball found Mosadi on the right who controlled the ball before picking up Margeman in the box and he produced a clinical left foot finish to win us the game.

Hengelman produces couple of great saves in the last five minutes to make sure we travel back home with the three points.

Mosadi was deservedly named man of the match.