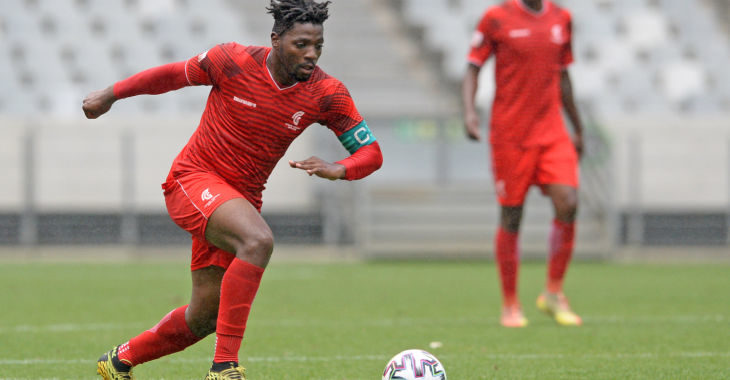 We caught up with Cape Town Spurs captain Thendo Mukumela ahead of Monday’s Nedbank Cup match away to Baroka FC. Kick-off at Peter Mokaba Stadium is set for 17h00 CAT.
Mukumela, 23, arrived at Ikamva in August 2018 and has been an important part of the club’s continued push for promotion.
The Urban Warriors skipper is happy with the progress made by the club in recent weeks and believes that a good run in the Nedbank Cup will serve as a timely boost in Spurs’ push to climb up the GladAfricaChampionship standings.

What are your thoughts on the season thus far and what does Spurs need to do to move up the league standings?

I think obviously we’re disappointed because we thought by this point in time (halfway through the season) we would be on top fighting for the top spot. But I’m happy with the progress we’ve made in the last few games – we’ve managed to get seven points from the last four games. So, I think compared to where we started, we are doing well and we will get to where we want to be.

What does the upcoming Nedbank Cup match mean to Spurs in terms of building momentum?

I think the Nedbank Cup is a stepping stone. In a way, we do want to prove to everybody that we can still do this, we’re still in this and we still want to win the league. I think the Nedbank Cup helps us in terms of seeing how certain players are performing and also for getting our confidence back. Also, if we beat Baroka on Monday, this will give us more confidence because beating a Premiership team will show us that we can get to the top of the log.

What are your thoughts on Baroka FC and what can Spurs expect from them?

We’ve watched them play a lot so we know how they play and I think we’re ready – we’re going to give them one hell of a game.