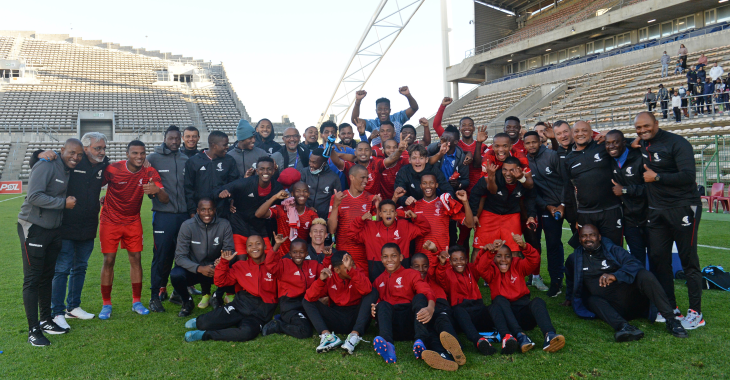 A spirited Cape Town Spurs managed to rescue a point against the University of Pretoria in the GladAfrica Championship on Sunday afternoon, as the club secure their spot in the division for next season.

In a moment of concern for the University of Pretoria, Tuks were forced into making an early change as Luvuyo Phewa made way for Wonderboy Makhubu after sustaining an injury.

Just moments later, Spurs opened the scoresheet as Eyona Ndondo turned Keegan Allan inside out before calmly slotting the ball into the back of the net.

The visitors pressed just after the half-hour mark with Zama Dlamini summoned into making a point blank save from a glancing header.

Following a swift counter-attack, Tuks pulled one back in the 32nd minute with Etiosa Ighodaro finding himself in the right place to slot home a parried effort from the Spurs goalkeeper.

The University of Pretoria then went route one and capitalised from a free-kick situation in the 41st minute, as the substitute put Tuks ahead with a poacher’s effort.

Spurs had a goal ruled out on the stroke of half-time as the officials spotted an infringement from Toriq Losper just before Gregory Damons put the ball into the back of the net.

Coach Shaun Bartlett’s men started the second-half on a positive note as they pressed on in the opposition half. Spurs continued to dominate on the ball well into the 70th minute of the game.

With 12 minutes to go, substitute Ashley Cupido levelled matters after he was left unmarked in the area and neatly tucked away his header.

The game ended 2-2 at the Athlone Stadium as supporters were treated to an eventful second half from the home side.