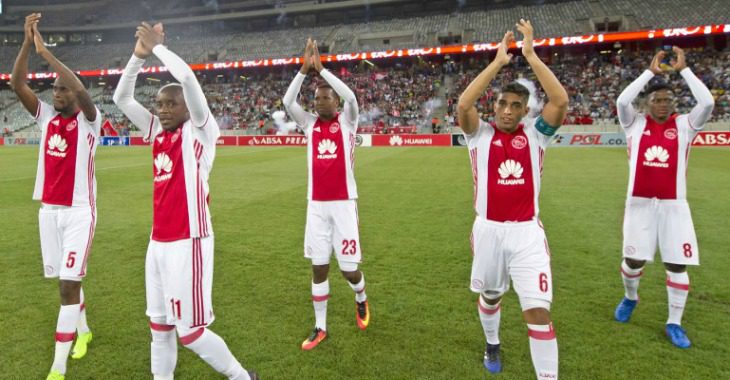 The 2016-17 Absa Premiership season came to a close on the 27th of May with Ajax Cape Town ending their campaign with a disappointing 1-0 defeat to Baroka FC at Cape Town Stadium.

In reflection, the loss to the hard-running Limpopo side sums up what was a roller-coaster of a campaign for the Urban Warriors, filled with plenty of ups and downs.

Roger de Sa had guided the club to the 2015 MTN8 trophy, but the ensuing Absa Premeirship season would end on a whimper with a 10th placed finish secured on the final day of the campaign following a 1-0 win over Bidvest Wits. Prince Nxumalo’s 13 goals a highlight.

De Sa subsequently started the 2016-17 season in the Ajax Cape Town hot seat with the notable acquisition of Mark Mayambela and Lebohang Mokoena giving the Urban Warriors fans something to smile about.

Nathan Paulse was on the score-sheet in a 1-1 draw away to newly promoted Baroka on the opening round of the campaign, and the burly forward would take his scoring form in the league to four successive matches leading up to the first ever Ajax Cape Town vs Cape Town City Derby.

A 1-0 defeat would duly follow and with results not forthcoming De Sa stepped down from his post with Mich d’Avray stepping in as caretaker coach for a 2-0 home loss to SuperSport United. Former Dutch international Stanley Menzo, who had been roped in as the Head of Youth but a few months early, was officially unveiled as the new head coach in October with his first official match away to Free State Stars on the 2nd of November 2016. The match ended in a 1-1 draw.

After three months of trying, we finally broke our duck as Menzo’s troops recorded their first win of the campaign; a 3-2 victory away to Platinum Stars.

The month of November would prove very fruitful indeed with a 2-0 win over CAF Champions League holder Mamelodi Sundowns to follow as we well and truly turned our fortunes around. The Urban Warriors would end 2016 on a high with a 1-0 home win over Chippa United seeing the side up to ninth ahead of the mid-season break.

The second half of the season would start very much like the first with a 5-0 defeat away to eventual champions Bidvest Wits not how the Urban Warriors wanted to kick-off 2017.

A seven game winless run was finally snapped with a 1-0 home win over Highlands Park. Mamelodi Sundowns would subsequently get their revenge over the Urban Warriors, but a four game unbeaten streak (which conjured four clean-sheets in succession) pushed the Cape club up to eighth place on the log standings heading into the final round of fixtures. Baroka, motivated by the fact that defeat would push them down back to the National First Division, recorded a 1-0 win in the Mother City to jump above Highlands Park. The result favourable for Baroka followers, but not for the Urban Warriors faithful as we dropped out of the top eight to end the season in 10th place on 36 points.

Telkom Knockout Review: 1-0 defeat to SuperSport United in the Round of 16