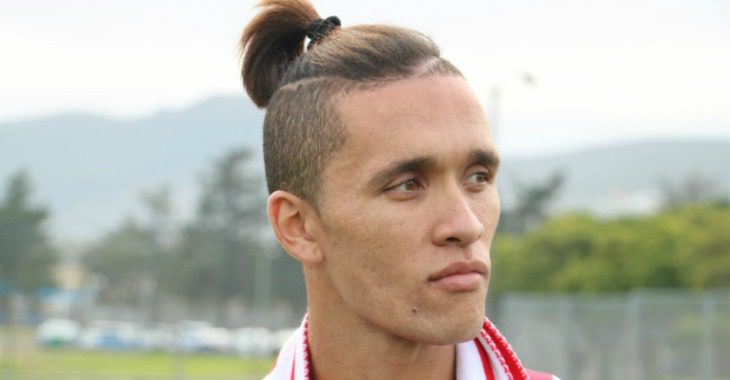 Arriving from King Shaka International Airport this morning, Sedwyn made the short trip to our Parow base where he met up with club CEO Ari Efstathiou.

George then successfully underwent a medical check-up at the Sport Science Institute in Newlands on Friday afternoon with the striker to return to Cape Town later this month, ahead of pre-season training set to kick-off on the 3rd of July.

The 25-year-old scored 20 goals in 27 games in the NFD last season, a haul that included three hat-tricks, notably hammering home 4 goals in a 6-1 thumping of Magesi in October last year.

Born in the suburb of Eastwood in Pietermaritzburg, George has climbed the proverbial South African League ladder. Having started his career with Local Pirates/Glenville he turned out for Maritzburg United’s development teams (U15 & U17).

The burly forward plied his trade in both the Caslte League and ABC Motsepe League, running out for teams like Commanies FC, Maritzburg City, Phiva Young Stars and Friends FC before signing for ambitious NFD side Royal Eagles in January 2016.

It didn’t take George long to make an impression as he scored on his debut in a campaign that conjured 4 goals. Things would get even better for the striker in the 2016-17 season as he ended top of the scoring charts in a campaign that saw the club narrowly miss out on a PSL promotion-relegation play-off spot.

“I’ve heard of Ajax Cape Town’s facilities and to see it for the first time I thought ‘wow I’m overseas here’ – that was the first thing that came to mind,” said George in his first official interview as an Ajax Cape Town player.

“Growing up I’ve always wanted to play for Ajax Cape Town because I know it is a club that has a good structure, and this is a place where I can grow as a player, work on my technique and develop even further as a person/player on and off the field of play.

“Last season was just amazing, I pushed myself to the limit and I expect the same from myself here at Ajax Cape Town,” he concluded.