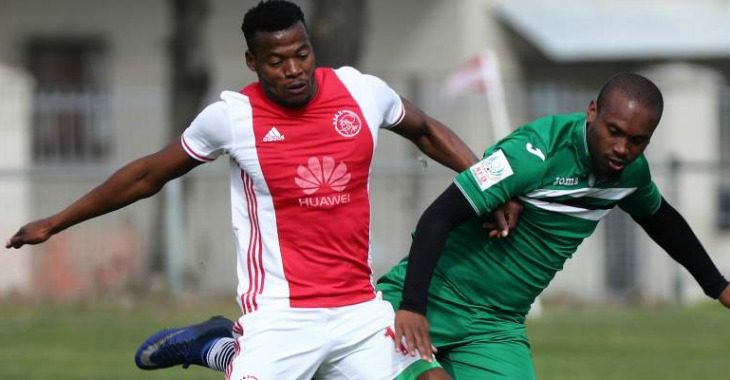 Ajax Cape Town made it two wins from two in pre-season as we now set our sights on Gauteng in preparation for the 2017-18 Premier Soccer League (PSL) campaign.

The Urban Warriors defeated reigning Absa Premiership champions Bidvest Wits 2-1 in a game of three 30 minute stanzas last weekend, before easing to a 4-0 victory over Cape Town All Stars at Ikamva on Wednesday.

Goals from Rodrick Kabwe, Prince Nxumalo, Justin Jacobus and Neo Makua guiding the club to moral boosting win ahead of our pre-season camp in Pretoria.

Head coach Stanley Menzo is content with the progress made by the club’s players over the past three weeks, with the former Dutch international happy to see his methods transferred into match situations.

“We are slowly building, it is important to play games in pre-season. Things we do in training we try and reflect in games,” said Menzo.

“In our first game back the players played 30 minutes each, now we gave them 45 minutes and the things we practice, you can see things are falling into place and that is good.

Menzo continued: “In the meantime you also have to look at the players on trial and if they could potentially be good signings for us. That is what you are looking for in these matches.

“More than the result, I saw good things. It is good to play against teams of different qualities in pre-season. What was good today is that our opponents showed determination and we did well,” he concluded.