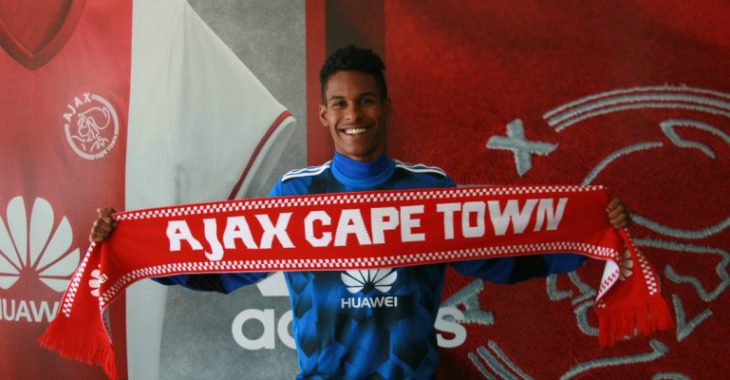 Following in his fathers massive footsteps, Junaid Sait is ready to take the Absa Premiership by storm in culmination of his move to Ajax Cape Town.

The 24-year-old officially joined the Urban Warriors on a four-deal this week, following an impressive showing for Stellenbosch FC in the National First Division (NFD) last season.

Sait captained Stellenbosch to a Premier Soccer League (PSL) promotion-relegation place, with the club narrowly losing out on a spot in South Africa’s top-flight to Baroka FC.

The towering centre-back returned to the Mother City last year following a brief spell with Swedish Allsvenskan side Falkenbergs where he worked under former Barcelona and Manchester United forward Henrik Larsson.

“First of all I would like to thank the club and everyone involved for giving me this oppurtunity and I am very happy to play at this level – it will be my first time playing in the Premiership so I am just looking forward to the experience.

“Last season didn’t work out for us at Stellenbosch, but we gave it our best, we tried, but it is football and not everyone can win. It was a valuable life lesson actually. I will just look to build on that and go from there.

While many will view following in your father’s footsteps as an unwanted burden, Junaid embraced the challenge and believes the fact that his dad is a former professional has been nothing but a boost to his own career.

“I think most people think it is difficult, but it is different generations,” Sait continued. “Football is not what it was 20 years ago, but I prefer to focus on the positives. I don’t think about the pressure, I look at the positive things it brings like the advice he gives me, always being there for me. It is actually more helpful than people think.

On his time in Scandinavia, Sait also opted to focus on the positives with his time working under Larsson a highlight of his career thus far:

“My time in Sweden, I was there for a year-and-a-half, it was a good experience. My coach was Henrik Larsson who has a huge football background and while he was at the club I did well and he really liked me. But unfortunately when coaches changed I didn’t feature as much, but I did learn a lot. Sweden is different to South Africa. I was happy for that opportunity, but life goes on and I am really looking forward to this fresh challenge.” Sait concluded.