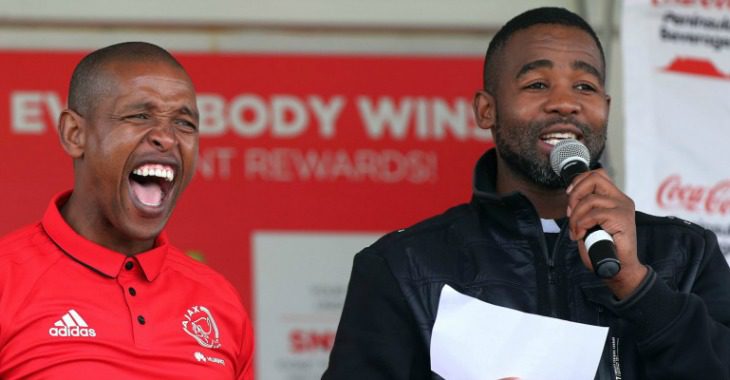 Ajax Cape Town PRO Thabiso ‘Shooz’ Mekuto has reserved a special word of thanks to everyone that made our 2017 Supporters Day a success.

The Urban Warriors welcomed 100’s of loyal fans to our Ikamva base in Parow on Saturday 12 August, as we officially launched our 2017-18 season ahead of our opening Absa Premiership fixture this coming weekend.

Come rain or sunshine, the Urban Warriors faithful showed their support as we kicked-off the campaign in style.

“Another season, another Supporters Day to officially launch the season…what a wonderful turnout from our loyal Urban Warriors on a day where the rain decided to pay us a visit,” said Mekuto.

“A special thank you from Ajax Cape Town for coming in your numbers – in the rain – and for paving the way for what we hope will be a great season. Hopefully the same energy, love and excitement will be on display throughout the season and hopefully our fans will be rewarded for a great start to the season.

“Thank You very much for coming.

?❤️| It's all happening at Ikamva, pull through! #BeHere #WeAreAjaxCT pic.twitter.com/EkL4u9wUFW

Mekuto also lavished praise on our sponsors with everyone chipping in to make our Supporters Day extra special.

“We also want to thank all our sponsors: Huawei, Adidas, Coca-Cola, Powerade, Fineline, Robert Daniel, Futurelife, DotComSport, Barons Volkswagen and all of those who contributed to making our supporters day a success.

“We hope to continue making you proud and happy because our fans are our priority, thanks for everyone that supported us,” Mekuto concluded.