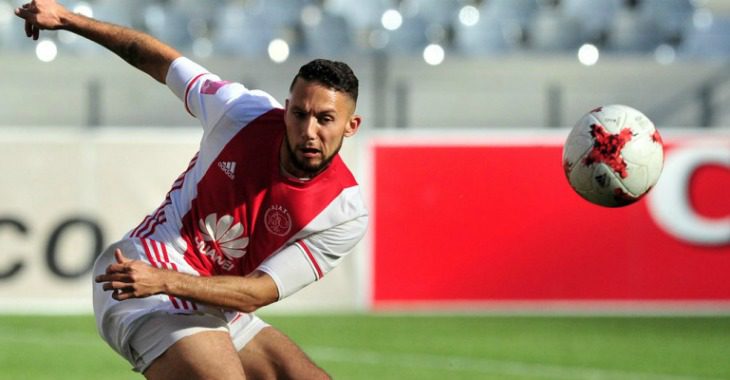 It has been a memorable few weeks for Ajax Cape Town defender Roscoe Pietersen.

While his absence in the first three games of the 2017-18 Absa Premiership season – due to suspension – comes as a massive blow, Pietersen has enjoyed an unforgettable period on a personal level.

South Africa were held to a 2-2 draw in the first-leg at the Buffalo City Stadium in East London this past weekend, and will need a minor miracle if they are to turn their fortunes around and subsequently seal their place at the showpiece set to be staged in Kenya.

Pietersen will tonight jet off to Johannesburg to link up with fellow Urban Warrior ,Masilake Phohlongo, and the rest of the Bafana Bafana squad, ahead of their flight to the Copperbealt.

“I am still in shock, it is an honour to be called up to the National Team,” Pietersen said. “The red card in the last game of last season…a blessing in disguise looking back right now.

“Yes , I am looking forward to the trip, I have never been to Zambia before – no other African country for that matter – yes I know the first game ended in a 2-2 draw so it will be a difficult task away from home, but I am sure the guys will be up for it. The heart and fight will be there.

It doesn’t get much better than this for the 28-year-old: “Two very big weeks for me, if I could get married every week and get a Bafana Bafana call-up every international break that would be awesome, but we only get married once.

“Hopefully, though, this won’t be my last National Team call-up.

Pietersen will link up with former Ajax Cape Town player Mario Booysen in camp, with the Strandfontein-born defender hoping to partner his good friend in defence against Chipolopolo this coming weekend.

“It will be on an international stage, I am open to the experience and hopefully I can learn a lot. I will take this experience back with me to the club and hopefully share what I have picked up with my teammates here at Ajax Cape Town.

“I am friends with Mario, hopefully we can start the match together as we grew up playing together. We played together at junior level, I’ve known him for years, so obviously that bond will be there and the understanding as well. He is a good friend of mine and it will be great to play with him,” Pietersen concluded.