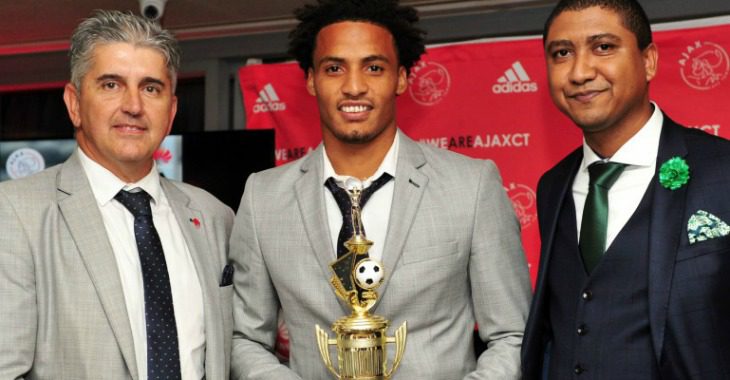 With the dust starting to settle following the exciting news that Rivaldo Coetzee will join Scottish giants Glasgow Celtic – pending a medical & work permit – we caught up with Ajax Cape Town CEO Ari Efstathiou, who has further boosted the club’s motto: Our Youth, Our Future.

Coetzee arrived at Ajax Cape Town as a fresh-faced 15-year-old from Kakamas, a small town in the Northern Cape province with an estimated population of 10 000 people.

Following in the footsteps of Steven Pienaar, Daylon Claasen, Thulani Serero and Eyong Enoh – Coetzee is not the first, and nor will he be the last – to make the switch from Ikamva to the European football stage.

In this interview Efstathiou elaborates on the vision of the soccer club, while also sharing special insight into how the Urban Warriors continue to break barriers when it comes to youth development in Mzansi.

Q: Ajax Cape Town have again proved that the club boast the premier Youth Academy in the country…

Efstathiou: Ajax Cape Town has undoubtedly proved once again that we always priorities the future of our young talent after graduating from our academy, we try and find the best way to enrich the player’s future by placing them where we believe they will prosper most.

We are happy that more players will be following Rivaldo to Europe in the very, very near future. We are glad that Ajax Cape Town’s vision and commitment to youth has once again proved it’s worth.

?| We are extremely proud to announce an agreement with @celticfc , for the sale of defender Rivaldo Coetzee, HAS BEEN CONCLUDED. pic.twitter.com/gUhB0y1r3H

Q: It is rare to see a player from the African continent make a move from a local club straight to a club of Celtic’s stature, were you always under the impression that Rivaldo is cut out for Europe?

Efstathiou: I think it is important to note that when we scout our youth, we do so with a plan in mind. There are certain players that have the ability to play only in South Africa, and there are some, that as they progress, we believe can play in Europe.

For example, Rivaldo is someone we believed shouldn’t be going to a South African club and although we had received written offers for him, we still felt that the ideal place for him would be in Europe. But, we had to find the right club for him.

We had limitations with regards to his height in terms of playing in Europe, but we managed to find a club that takes advantage of his style – playing from the back – and that is what Celtic will do.

Q: Is the message to the players who are part of the club’s Youth Academy: ‘believe in the vision of the club’?

Efstathiou:If you look at the vision of the club, that is where we invest the majority of our funds, we invest in the youth. Sometimes they have natural ability, but sometimes it has to be nurtured from them and it takes a lot of effort from the club and a lot of expenses.

But, we have proven over the years – if you look at the players that we have sent to Europe – Steven Pienaar, Eyong Enoh, Daylon Classen and Thulani Serero, we are able to produce players to play in Europe.

We can only do so much for the player, but then it is up to him to take it to the next level. Rivaldo, for example, did exactly that. He played for the national team at 17, we never created that – he did that on his own. But, what we did do is, we gave him the platform to be able to do that.

We have to then ensure, if it is possible for him to play in Europe, we have to try and get him there.

I think people have to believe that the Ajax Youth System works, it has proven that it works not only in Cape Town, but in Amsterdam as well. It will always work to get promising football careers moving in the right direction.

Q: Please elaborate on the Youth structures at the club and what is done for the youth exactly…

Efstathiou: Let’s start at the beginning. We go through a very thorough scouting process at the age of 12 (1st Touch Programme). That is where our major focus goes as we look at over 1000 children in 10 different locations across the Western Cape. We narrow that figure down to only 16, only 16 when sometimes we could quite comfortable bring in 30 or 40. That is where it starts, the major scouting process starts there.

We kit out the youngsters, we fetch them from home, we bring them to Ikamva 3-4 times a week plus matchday, the players are trained by professional coaches, we nourish them and take them home every single day that they are here.

I don’t think there is another club in the country that undertakes such a rigorous process with their youth so you will have success at some point in time. I think the problem for us is that we should have more success, we should have more players coming through the system.

Efstathiou: I think it is a wonderful statement to say that we build careers. I think this notion that we are a selling club should be reviewed. We are building careers and allow them to leave to further enhance their potential. Yes, we build careers and again going back to Rivaldo, it is a wonderful story. From Kakamas in the Western Cape at the age of 15 to Glasgow Celtic at the age of 20. It is only five years, it is magnificent.

Q: Do you see more players following in Rivaldo’s footsteps?

Efstathiou: I am confident there will be, very soon, and am sure we will be able to make an announcement very shortly.

If you take the model of Ajax Amsterdam, they are now over 100 years old, they had to start exactly where we did, they went with what they believed first. They believed that success should be built through the youth first, you have to find the right balance between promoting footballers from the club’s Youth Academy and winning silverware on a regular basis at First Team level, and I am sure that over time we will be able to do both.

There is more talent coming through, some will stay here and play for our national team and gain success, and some will be able to spread their wings in Europe. What we need to do is invest more in our youth and get more youngsters coming through the system.

We choose to spend more money on promoting our youth, we would rather do that – like we did in our success of winning the 2015 MTN8 title. (note: 10 of the 11 starting players in the final win over Kaizer Chiefs graduated into the First Team from the club’s Youth Academy).

To produce what we produce takes patience, time and money. But can you imagine what our national team would be able to produce if our structure was implemented across all 16 teams in the Absa Premiership. If you look at the latest Bafana Bafana team eight or nine of the 25 came through the Ajax Cape Town’s Youth Academy, it is unbelievable.