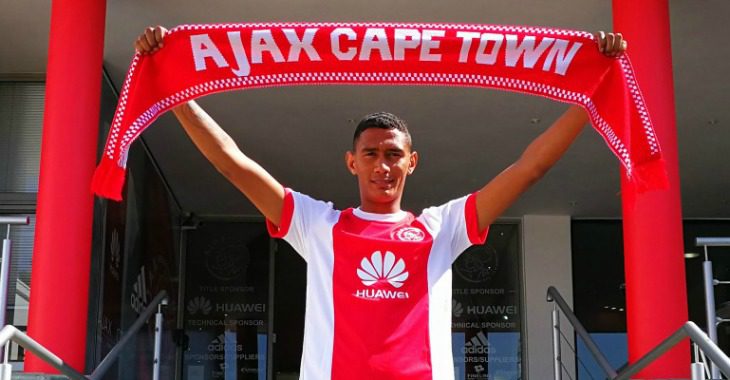 Mario Booysen is back where it all started for the towering defender, having completed his return to Ajax Cape Town on transfer deadline day last Thursday.

The 29-year-old graduated from the Urban Warriors Youth Academy 10 years ago and finds himself back home following spells at Absa Premiership rivals SuperSport United, Maritzburg United and Mamelodi Sundowns.

Here he catches up with ajaxct.co.za on his return to the Urban Warriors:

Q: Mario, welcome back to Ajax Cape Town, it has been six years since you left Ikamva for South Africa’s capital. What has changed?

It feels good to be back, not a lot has changed to be honest and a lot of people that were here when I left are still working here which makes it easier to settle in.

What is different is that I am more experienced, I left as a youngster, but I do know the system and the Ajax Cape Town family very well. I played for the club’s development teams for six, seven years and I know the setup.

I am a bit older, but that is the only real change.

Q: You have obviously played alongside a few of your teammates during the course of your career, Roscoe and Rheece come to mind, which also helps the settling in period…

Most definitely. Captain Mosa Lebusa is another, I have played against most of the guys obviously, but yes it isn’t unfamiliar. I know the Ajax Cape Town philosophy – it was part of my upbringing so for me it won’t be difficult to settle in, I know the style of play.

?| Mario Booysen is back where it all started! #WelcomeMario ?⚪ pic.twitter.com/Dqono7Nnyz

Q: The club lost Rivaldo Coetzee – a great player in his own right – but you bring other qualities to the party, leadership qualities having captained Bafana Bafana and lots of experience having made your top-flight debut a decade ago…

Rivaldo did really well for Ajax Cape Town, applied himself well and I wish him all the best at Mamelodi Sundowns.

Yes, I do bring experience, we have different qualities, but for me at the end of the day it is about the team and to help the team. I come here as a leader, but I also want to learn from my fellow teammates and I feel that the quicker we adapt to one-another the better for the team. It is all about getting the results at the end of the day.

For me it is about giving advice in the right way and helping the youngsters around me. The senior guys have to stand together and lift the team, not a good start to the [2017-18 Absa Premiership season], but all is not lost and there is still a very long way to go.

The togetherness and brotherhood will continue to grow. On a personal level, having captained Bafana Bafana – coming here, it can only help me grow as a player. We must grow as a team and I am looking forward to the challenge and helping the team.

Q: Today was your second training session with the team, what is your initial impression of head coach Stanley Menzo?

Yes I have been around the block, but I am open to learning. I want to learn and I am open to take advice from the coach as at the end of the day we have to apply his tactics.

It has been good, I came through this system – it is like riding a bike again. I worked with coaches similar to Coach Stanley like Foppe De Haan, it is not a different environment. At the end of the day football is football – it is the same language. I am eager to continue growing as a footballer under Coach Stanley.