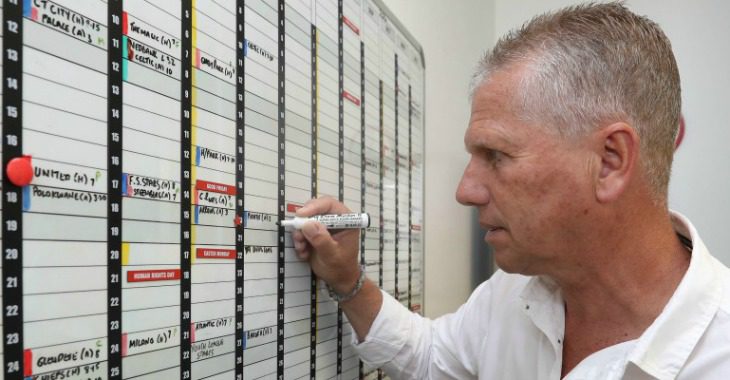 In the latest ‘Get To Know’ segment on ajaxct.co.za we caught up with Ajax Cape Town Youth Administrator, Kevin Rowell.

Rowell will bring up a decade at the club on the 7th of December 2017, having initially joined the Urban Warriors as a Team Manager. Born just outside Leicester in England, Kevin moved to South Africa with his parents, with his mom from Mzansi, they returned to the Mother City.

He lived in Devils Peak and went to Cape Town High School before attending the University of Cape Town (UCT), where he obtained a diploma in public relations.

Having started off in retail marketing, Kevin went backpacking overseas for three years – doing the odd loose ends during his travels. On his return he worked for the largest office equipment company in South Africa at the time.

His bond with Ajax Cape Town was ignited by his son, Matthew, who was scouted by the club at Under-11 level. Having kicked-off a fruitful relationship with the Urban Warriors, Kevin would soon be employed permanently at Ikamva and things continue to flourish 10 years later. Now lets hear from the man himself…

Rowell: I started off as a Team Manger with Craig Rosslee, that is when they started the concept of having Team Managers for all the youth teams.

Ajax Cape Town never used to have Team Mangers, but he decided to implement that approach as he experienced what they had been doing in Amsterdam, having worked a bit at De Toekomst, so he brought me on board because we played a bit of football together in the past.

From there, I did a bit extra and a little bit extra… and eventually I was offered a permanent position – as Youth Administrator.

Over the years I have attained additional responsibilities: looking after the building, the grounds. As time went on I garnered more experience working at Ikamva, I also took over the kit supplier situation – ordering of kit for all the departments and distributing and branding of the kit.

So a bit of everything then…

Rowell: Youth Administrator mainly, off the field I do all the arrangements, nothing on the field – no coaching – but I do the program for the week, the fixtures, the transport schedule – which is very important. We pick up 80% of the boys in our Youth Academy at school or at home and bring them to practice & take them home afterwards. That is a big responsibility.

The coordination of the transport is very important because you don’t want players in this day in age standing on a street corner, waiting for transport. It is important that we keep that on track.

A year ago we launched a programme with help from Ajax Amsterdam and the Dutch Consulate – a nutrition programme, which provides all the players with a meal before they go home.

We used to send food home with the players, but there is no guarantee that they will eat the food. So the players eat here and we are very lucky to have that system in place.

Let’s break it down then, how does your weekly schedule look?

Rowell: If you start on a Saturday morning, if we are playing home games: I am here just to make sure that the fixtures are coordinated, the referees are on time, the field allocation is sorted, the visiting teams are looked after etc.

Any logistical problems, I am the go to man. When it comes to away games, which is every second weekend, I choose my games and go watch the games just as representation from Ajax Cape Town.

Sunday’s are a day of rest, but the phone is not off. But, it is family time. Monday is a busy day because I finalize all the planning for the week, we have a department meeting at 11h30 to discuss the week’s plan.

Tuesday, Wednesday, Thursday and Friday is training for the Youth with the odd game in-between, catch-up league matches or friendlies. Friday night is normally reserved for ABC Motsepe matches – in a nutshell, that is my week and that is what I do at the club.