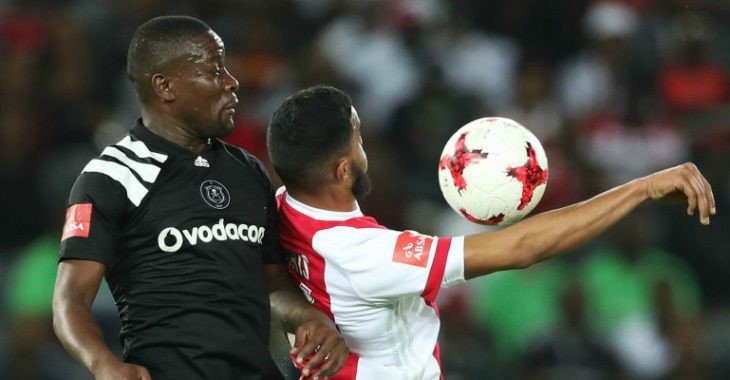 Ajax Cape Town’s struggles at Orlando Stadium continued, as the Urban Warriors suffered a 1-0 defeat to Orlando Pirates in an Absa Premiership fixture on Tuesday evening.

Bernard Morrison’s ninth minute strike the difference between the two teams as the Buccaneers climbed to second spot on the log standings. Ajax Cape Town remain in 15th place having yet to win a game this season.

The Ghanaian, Morrison, pounced on poor defending from a long throw-in to guide the ball past Brandon Petersen at the back post, for what proved to be the only goal of the game.

Thabo Mosadi almost found the perfect reply for the visitors, but his rasping shot moments later could only trouble the side-netting.

Chances were few and far between for the remainder of the half with both teams lacking real fluency, Pirates 1-0 up at the break.

The hosts squandered a glorious chance to double their lead four minutes following the interval, but Brandon Petersen was alert to the danger as he pulled off a great stop to deny Thabo Qalinge from close range. Pirates unable to capitalize on a 5 v 2 situation.

Thamsanqa Gabuza had the ball on the back of the net on two occasions in the ensuing 19 minutes, but on both occasions the linesman’s flag was raised for offside – keeping the Urban Warriors in with a shout.

And Tashreeq Morris almost stole a point for the visitors in the dying stages of the clash, but he was denied by Wayne Sandilands who made a stunning close-range stop.