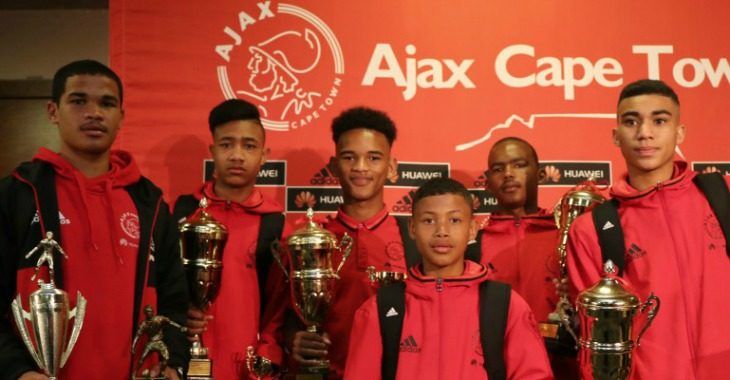 Ajax Cape Town boasts the finest Youth Academy in South Africa, with the amount of talented footballers nurtured by the club exceeding those of any of our competitors.

Following another fruitful year, Our Youth were rewarded at our annual Youth Awards with the 2017 edition hosted at the iconic Cape Town Stadium on Saturday, 30 September.

Former Urban Warriors head coach Foppe De Haan, who recently re-joined the club, was a special guest at the awards ceremony in the Mother City.

De Haan is an Ajax Cape Town legend with the work he continues to do for the club recognizable beyond measure.

He will forever fondly be remembered for taking the club to the cusp of Absa Premiership glory & for playing a vital role in nurturing the talent of Thulani Serero, George Maluleka and Lebogang Manyama, among others.

“Some of you are award winners today, but this is only the start. You have to be better tomorrow,” said De Haan.

“I wish you a lot of luck, just remember: Talent is 1, Drive is 2 and Mentality is ALL.”

There was also a special mention for Thethani and Dean Solomons who joined Ajax Amsterdam at the end of August. The Ikamva graduates, are currently part of the Dutch club’s U19 team with the view of breaking into the First 11 in the coming years.

U18 Player of the Season: Oswin Appollis

U15 Player of the Season: Cade Erickson

U14 Player of the Season: Fernando Lourens

U13 Player of the Season: Kerwin Oliver

U12 Player of the Season: Faiz Davids