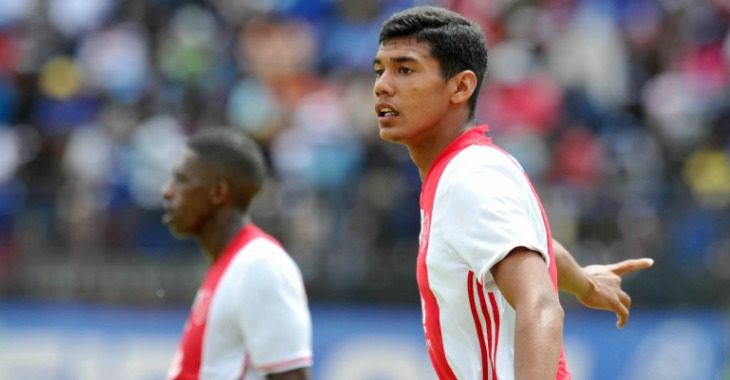 Ajax Cape Town are excited to announce the graduation of Mogamat Kiyaam Bull, from our Youth Academy to our Premier Soccer League (PSL) squad.

The 18-year-old follows hotly in the footsteps of Leo Thethani – now with Ajax Amsterdam – in making the jump to the PSL team over the course of the past few months.

Bull officially joined the club in January 2015 from Old Mutual. Born in Mitchells Plain on 30 September 1999, the towering defender started his footballing journey at the age of 4 with Leeds.

He duly joined All Stars before moving to Old Mutual who scouted him at the SAFA Cup. While there, he went for trials – SAFA trials – in Worcester and that is where Ajax Cape Town scouts Luis De Faria and Sergio Dos Santos spotted him and asked him to come and train with the club. The rest – as they say – is history.

Bull has toured to the Netherlands with the Urban Warriors on two previous occasions and was part of the team that made waves at the Terborg Toernooi and ICTG Tournament earlier this year.

More recently, he was named the defender of the competition at the 2017 Engen Knockout Tournament hosted in Parow in June/July and is also a former winner of the CTTFA Youth Player of the Season Award.

Flanked by his family, including his father, mother and extremely proud grandfather, Bull put pen-to-paper at Ikamva on Tuesday afternoon before receiving a memorable send-off from the Youth Academy.

Head of Youth, Hans Vonk, handed Bull over to PSL Head Coach Stanley Menzo who welcomed the centre-back to the First Team changing rooms: where he will now be based and focused on making the next step in his blossoming career.

In his first interview as a PSL player, Bull was quick to thank those who guided him on this path to South Africa’s top-flight…

“My first coach, he is like a father to me, his name is Zaid Jappie, he used to pick me up every day and I used to do everything with him. His brother [Yusuf] used to play for Ajax Cape Town and he [Zaid] told me that this is where I have to be and this is what I have to fight for and that is what I did,” Bull told ajaxct.co.za.

“That is what I did, I always knew that this is where I want to be.

But, for Bull, the decision to join Ajax Cape Town in the first place wasn’t as straightforward as one might think and admits that he had to escape his comfort zone – motivating himself to aim higher – before making the decision to come on trial and ultimately join the club.

“I didn’t even want to say this, but my grandfather and I where driving here to Ikamva and on the way he was like ‘do you want to be here, do you want to be an Ajax player’ and I was thinking ‘let’s turnaround and go back – I want to be comfortable’.

“But, I challenged myself. That was one of my weaknesses, I like to be comfortable, but I needed to come out of that in order to be where I am today and thankfully I made the right decision.

Bull continued: “Life here started very well, I went to Europe, started playing for the [MultiChoice] Diski Challenge team, but then had a knee injury. Things went down from there, but I took it as a learning curve and it actually made me stronger as a player.

“I will always fight and I know where I want to be one day, and I am really thankful for this wonderful opportunity.

So, what can the strikers in the PSL expect from Kiyaam Bull?

“Playing in the PSL will be very difficult,” he continued.

“Being a defender there are huge responsibilities as one mistake can result in defeat for the team. I think, playing in the PSL, I need to try and give the team a positive vibe, do my best for the club and fans, and tackling wise – I will shake the strikers up a bit [laughs].”