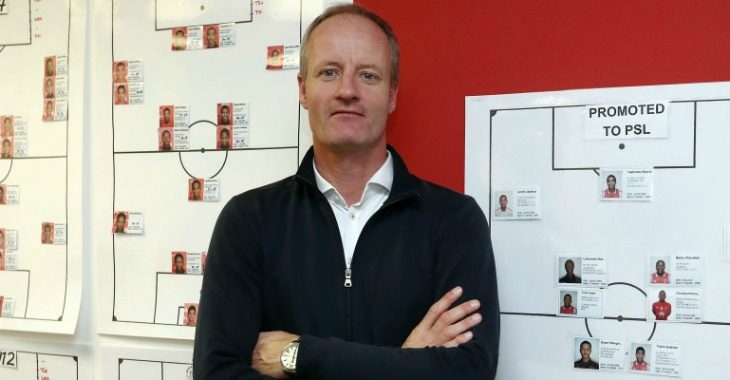 Head of Youth at Ajax Cape Town, Hans Vonk, has called for improvement from all the youth teams at the club, despite a relatively successful season.

Boasting three CTTFA Super League titles and three further Cup titles, the Urban Warriors were not silverware shy this past season. But, considering Ajax Cape Town are the yardstick when it comes to football development in the country, Vonk believes that the club should be winning everything on offer.

“It was okay in my understanding, but yes, not good enough,” Vonk said in reflection of this past season. “In my opinion all our teams should win their league and cup trophies – that is something Ajax Cape Town should do.

“We have additional tournaments like the Engen Knockout and Bayhill Premier Cup which we should perform in – at least in the Engen Tournament we reached the final which is good, but we didn’t win it.

“Overall performance, okay, but we can and should do better. If you look at the quality of football; that too can improve. We play a lot of opponents and win 6, 7 or 8-0, but the football can be better and it shows when we play strong teams like Fish Hoek or Old Mutual. There is some room for improvement.

A problem that has been synonymous with South African football is the failure to capitalize on goal-scoring chances, and while Ajax Cape Town’s youth teams dominate most games – a sense of vulnerability has emerged.

As is always the case when building your foundation on possession football, the opposition are inclined to sit deep and hit on the counter-attack. In turn, it us up to Ajax Cape Town to break down stubborn opposition and score when opportunities emerge.

“In games were we do lose, we often dominate, but we are just unable to score. Looking back, it was okay, but must be better,” Vonk added.

“I think that [scoring goals] is a general South African problem. Not just here, but everywhere. We are playing a system of football, that if you play it well it is very nice and eye-catching, but you are also vulnerable.

“You have to be aware of what is happening on the field. We always try and dominate, but we have to try and be a little less vulnerable. That is something we have tried to implement from U12 level to Young Ajax.

Foppe De Haan visited the club over the past few weeks, with the former Ajax Cape Town head coach having adopted a new role at Ikamva – focusing on improving the youth set-up.

Former Bafana Bafana goalkeeper, Vonk, highlighted some of the areas of concern, but believes all can be achieved through hard work and commitment.

“Something that Foppe highlighted is that we don’t train enough. We can’t get the boys more because of school commitments, but looking at the time we have with them, that time should be used in a better way.

“I think we can use our time better, and that is why Foppe was here – to give us his expertise.

Vonk continued: “I was brought up in Heerenveen who were one of the best youth club’s in the Netherlands at the time – their success was not something magical, it is not higher maths.

“It was based on hard work. That is something I picked up from Foppe and Carlos Alberto Parreira – no matter what your philosophy, yes we have a clear plan, but the training has to be at a higher level.

“We need to train better.

“Foppe lights up the room, everyone is excited when he is here. For the coaches here it was very interesting. We had a lot of discussions about football and it was really insightful. He is here to help us train our youth in a better way and we will implement his ideas,” Vonk concluded.