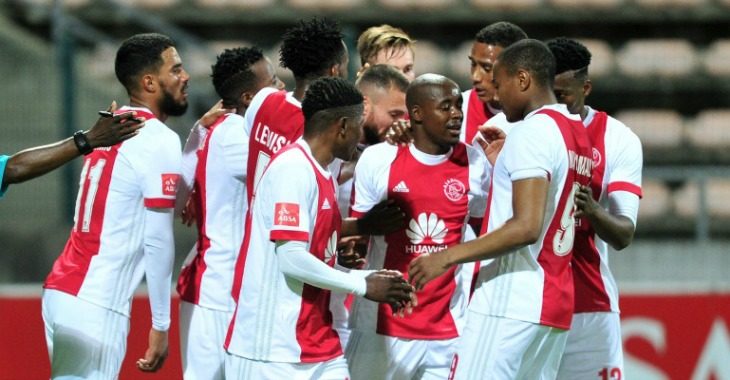 Goals from Bantu Mzwakali and Tashreeq Morris guided Ajax Cape Town to a 2-1 win over Bloemfontein Celtic in an Absa Premiership clash at Athlone Stadium on Saturday evening.

The Urban Warriors back to winning ways following an end-to-end encounter, with Siwelele a constant threat throughout the 90. The hosts, though, showed tremendous fight in the closing stages to hold on for all three points.

The game got off to a lively start with Roscoe Pietersen and Given Mashikinya chancing their luck from range in the opening 15 minutes.

Both equally unlucky to see their respective shots whistle narrowly wide of goal at either end of the pitch.

The Phunya Sele Sele striker burst straight through on goal, but waited too long to pull the trigger, allowing Mario Booysen time to rush back and do just about enough to force the forward’s attempt wide of Brandon Petersen’s right-hand post.

Mzwakali duly opened the scoring for the hosts in the 37th minute to make it two in two against the Free State outfit, having netted in the corresponding fixture last season.

Back in the starting eleven, the midfielder made no mistake from close range to convert a low cross by Pietersen.

Stanley Menzo’s troops 1-0 up at the break.

Celtic improved following the interval and were only denied an equaliser by Petersen who made an excellent save to keep out Roggert Nyundu.

Having absorbed wave-after-wave of attack, Morris provided the sucker punch as the Urban Warriors doubled their lead on the hour mark.

An element of luck involved, but it all transpired following a neat bit of interplay from Pietersen and Thabo Mosadi. Morris perfectly positioned to poke home Prince Nxumalo’s miscued effort.

Isaac Nhlapo was unlucky to put the ball in his own net in the 67th minute, following an intense spell of pressure.

The visitors continued to probe, but the Urban Warriors held firm to return to winning ways.