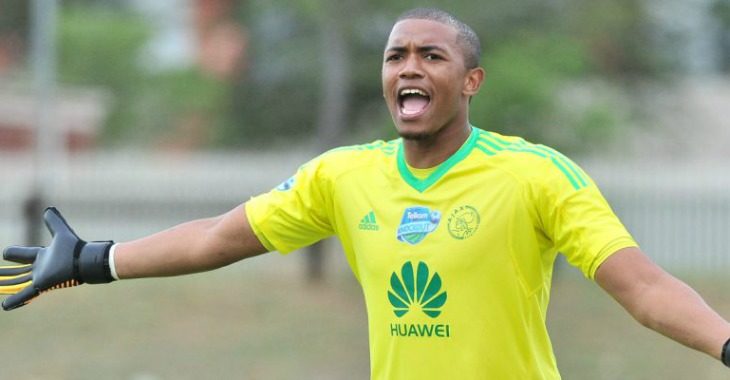 We caught up with Ajax Cape Town goalkeeper Jody February ahead of the club’s Absa Premiership fixture away to Platinum Stars on Wednesday evening.

The Urban Warriors return to the Royal Bafokeng Stadium in midweek, just under 12 months after their 3-2 win in Rustenburg. Three goals in the opening half-hour securing Stanley Menzo’s first win as head coach at the club.

February, who started said match in goal, is confident that the Cape side can repeat the feat as they aim to add to Dikwena’s league woes.

Platinum Stars have yet to win a league game this season, and currently sit at the foot of the standings. The North West club, though, did beat Maritzburg United on penalties this past weekend, with Ajax Cape Town suffering penalty heartbreak away to Polokwane City in the first round of the Telkom Knockout Cup.

“I think this is a good chance for us to get back on track,” said February. “We were unlucky to fall out on the lottery of penalties, we played well, but just couldn’t capitalize on our chances.

“Going there knowing that we got a good result last season is more than enough motivation that we can repeat the feat. We have a long break after this so we need a win to jump up the standings to help us.

February continued: “It is always good to get a few minutes under the belt and hopefully I can keep my place, I will continue to work hard and hope for the best.

“They won the cup game [vs Maritzburg] so they will have that momentum.

Platinum Stars will have added motivation to down the Urban Warriors with former Ajax Cape Town head coach Roger De Sa currently in charge at the club.

February is wary of the threat this may pose, but the 21-year-old remains positive that Menzo’s troops will get the job done up north.

“Knowing Roger, he knows us as individuals very well, he is accustomed to our style of play so it will be tough – they are in the same predicament as we are and last year after our cup game we had a turn of fortune. Hopefully this will be the case once more.

“It will be real tough, but I am confident the boys will pull through,” February concluded.